Peace, prosperity and stability in Azerbaijan is significant for the true realization of international projects and UN 2030 Agenda - Qaiser Nawab
Read: 961

Putin to help with safe zone but wants help in Idlib 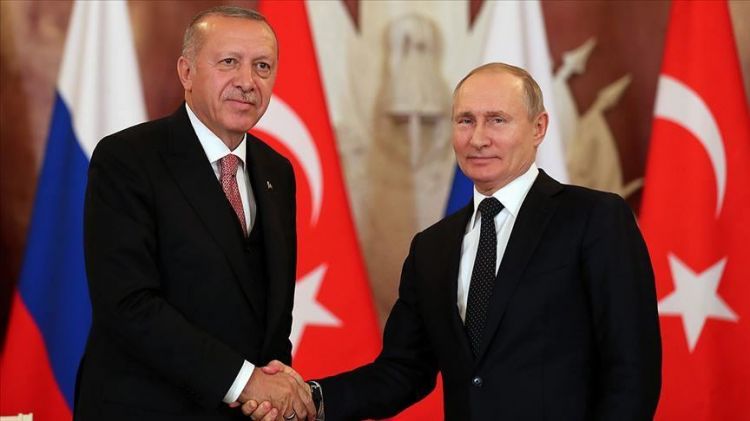 A summit Tuesday between the presidents of Turkey and Russia on a Syrian safe zone is expected to be positive, said a former White House security expert.
Turkish President Recep Tayyip Erdogan is meeting his Russian counterpart Vladimir Putin in Sochi today to discuss the latest developments and the future of northern Syria.
Matthew Bryza, a senior fellow at the Atlantic Council and former director on the National Security Council staff in the George W. Bush administration during 9/11, told Anadolu Agency on Monday that Russia will not stop Turkey's military operation against the YPG/PKK terror group.
Turkey launched Operation Peace Spring on Oct. 9 to eliminate terrorists from northern Syria in order to secure Turkey's borders, aid in the safe return of Syrian refugees and ensure Syria's territorial integrity.
"What I expect is it will be a positive outcome, that President Putin will continue folding YPG units into Russian and Syrian military units and move YPG operatives, soon to be former YPG operatives, out of the safe zone. Because if he were not to do that, I think, A) Russia looks like a diplomatic weakling, which is the opposite of what Putin wants, and B), if things get too out of hand between Turkey and the YPG, that's, that's not good for Russia or for us either," he said.
"But, and also, I think President Putin is going to try to use his help in the safe zone to leverage more help by Turkey in Idlib against the militias that Russia doesn't like. But that said, I do think that from time to time, Russia might allow a few YPG fighters to trickle back in, keep things tense as they do in the South Caucasus, which is where I spent so much of my career," he added.
On Oct. 17, Turkey agreed to pause the operation for 120 hours, expiring on Tuesday night, to allow the withdrawal of YPG/PKK terrorists from the planned safe zone.
Anti-Turkey agenda dates back to 2003
With regards to the declining number of friends of Turkey in the U.S. Congress, think tanks and the media, Bryza said Turkey started to lose the support of those groups on March 1, 2003 when the Turkish Grand National Assembly did not allow the U.S. to use Turkish soil as one of its fronts to attack Saddam Hussein's Iraq following the 9/11 terrorist attacks.
"To be honest, it was expected throughout the U.S. government, where I was working in fact, I was working at the White House at the time, including on Turkey, and I was the project manager of getting Turkey to say yes and the Grand National Assembly to our request to invade Iraq, through Turkey. And the failure to approve that vote came as a shock throughout the top levels of the then Bush administration," he said.
"And it began a process of the U.S. Central Command (CENTCOM), resenting Turkey and thinking Turkey doesn't behave like a real, quote-unquote, real NATO ally. In other words, there's an expectation that if the U.S. says ‘Do it,’ then a good NATO ally is supposed to just do it rather than habits, its own national interests," he added.
Bryza, who has chosen Turkey as home for seven years now, said the negative attitude in CENTCOM toward Turkey "grew and grew."
"And officers who were more junior on March 1, 2003, are now senior officers running the show," he said.
They speak a lot with reporters and are thought of as being the most credible voices on the ground, feeding kind of a steady flow of deeply negative news about Turkey, he added.
Bryza said the U.S. made a "ridiculous policy choice" by working with the YPG terror group in 2014 and, to make things worse, American soldiers established an "unprofessional emotional bond with this band of terrorists they were fighting with."
Then in time, the relationship with the YPG became a policy when CENTCOM grew fond of the YPG rather than exercising a tactical and transactional alliance to fight against Daesh as was first announced, he added.
When asked if Turkey still has any friends in the Pentagon, he said an anti-Turkey attitude is prevalent in CENTCOM, but the European Command is "full of friends."
"So Turkey has lots and lots of friends in the Pentagon," Bryza stressed, while criticizing the "Faustian" U.S. deal to use one terrorist group against another.
Brett McGurk 'unprofessional'
Asked whether Brett McGurk, the former U.S. envoy for the global coalition against Daesh, is overdoing his YPG serenade, Bryza said McGurk "grew way too emotional and unprofessional."
"It is not either a diplomat or soldier's job to become enamored with a partner as pursuing a common goal. Unless, of course, it's the NATO alliance; that's different. We are allies with Turkey. We are allies with Germany. We're allies with the United Kingdom. And it's natural that we should feel an emotional attachment because we share the same values," he said.
Bryza emphasized that the U.S. doesn't share any values with the YPG, the Syrian offshoot of the PKK.
In its more than 30-year terror campaign against Turkey, the PKK -- listed as a terrorist organization by Turkey, the U.S. and the European Union -- has been responsible for deaths of 40,000 people, including women, children and infants.
"They're a Marxist-Leninist splinter group that uses terrorism as a tool," he said (Anadolu Agency).