Poles to travel to the US without visas from November 11 | Eurasia Diary - ednews.net

Peace, prosperity and stability in Azerbaijan is significant for the true realization of international projects and UN 2030 Agenda - Qaiser Nawab
Read: 858

Poles to travel to the US without visas from November 11

After waiting decades, Poles will finally be able to travel to the US without a visa. 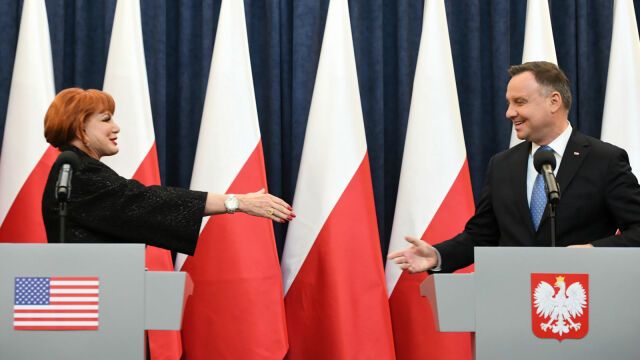 Polish President Andrzej Duda confirmed on Wednesday that Poland will join the US visa-waiver program on Nov. 11, the same day as the 101st anniversary of Poland regaining its independence, Eurasia Diary reports citing foreign sources.
President Andrzej Duda thanked President Donald Trump for keeping his promise of including Poland in the visa-waiver program before the end of his first term in office. He also thanked US ambassador to Poland, Georgette Mosbacher, for her efforts to introduce visa-free travel for Poles.
Mosbacher, speaking at a joint press conference with Duda, congratulated 38 million Poles and the 10 million-strong diaspora in the US for achieving this milestone.
She said that she had personally been convinced by President Duda that the issue of visa-free travel for Poles was one of national pride.
“This moved me, because I understood how much we have in common with regards to values and history,” she said.
The US diplomat also stressed that previous US presidents such as Barack Obama had promised to deal with the issue but failed to deliver.
"Georgette Mosbacher:
I have personally been convinced by President Andrzej Duda that the issue of visa-free travel for Poles was one of national pride."
After a diplomatic meeting between Trump and Duda, the US ambassador said that Trump told her, “I will empower you to create a special group to fix this.”
Such a group was soon formed in Washington and in Poland.
Mosbacher assured that the complicated process of Poland achieving the status of a visa-waiver program country was realized in accordance with the law.
A campaign was organized which appealed to Polish and US companies to ensure Poles could travel without red tape. The campaign worked and Mosbacher said she was delighted that it was possible to achieve visa-free travel for Poles before Christmas.
The visa waiver for Polish citizens will apply to business and tourist travel of no more than a 90-day duration.