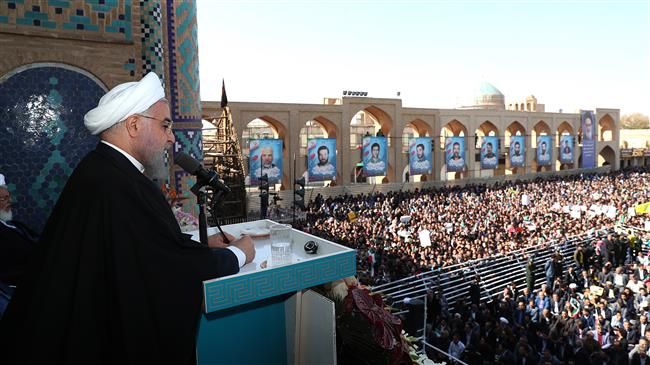 Rouhani told a large crowd of people in the central city of Yazd on Sunday that the discovery was made despite US hostilities which have mainly targeted Iran’s oil sector.

"It is a large oil field that extends from Bostan to the vicinity of Omidiyeh spanning an area of 2,400 square kilometers with a depth of 80 meters," he said.

"Today we are announcing to the US that we are a rich country and despite your enmity and tyrannical sanctions, the Iranian oil industry's workers and engineers have succeeded to discover this vast oil field," Rouhani added.

The US has unleashed the “toughest ever” sanctions against Tehran since unilaterally withdrawing from the 2015 nuclear deal, officially called the Joint Comprehensive Plan of Action (JCPOA).

Rouhani said, "The first thing I would like to emphasize here is that we have withstood the pressure exerted by foreigners over the past year, during which our people had to go through difficult times."

It’s been one year-and-a-half since President Donald Trump pulled the United States out of the nuclear deal with Iran and embarked on a policy of “maximum pressure.”