In October, Egyptian President Abdel Fattah al-Sisi invited his Russian counterpart to visit Egypt to attend the groundbreaking ceremony of a nuclear power plant that Russia will construct in the country 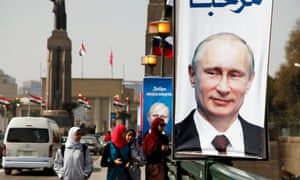 "We are in contact with our Egyptian friends in regard to preparations for our president’s visit because [Moscow and Cairo] actually agreed to hold summits every year, in fact, twice a year, in Russia and Egypt. I think a meeting will take place in Egypt next year. The visit will mark important developments in our strategic partnership with Egypt," Bogdanov pointed out.

There are important events ahead as far as bilateral relations go. Our Egyptian friends are coming up with various options. I think we will set a time and place for the meeting, which will be convenient for both leaders," the senior diplomat added.

In October, Egyptian President Abdel Fattah al-Sisi invited his Russian counterpart to visit Egypt to attend the groundbreaking ceremony of a nuclear power plant that Russia will construct in the country, and sign an agreement on launching a Russian industrial zone. Kremlin Spokesman Dmitry Peskov commented later that the visit would be considered through diplomatic channels.

Russia and Egypt signed an intergovernmental agreement to construct a nuclear power plant, named El Dabaa, in November 2015. The facility consisting of four VVER-1200 reactors will be built near the town of El Alamein on Egypt’s northern coast. The first reactor is set to be put into operation in 2026. Construction works are expected to be completed in 2029.