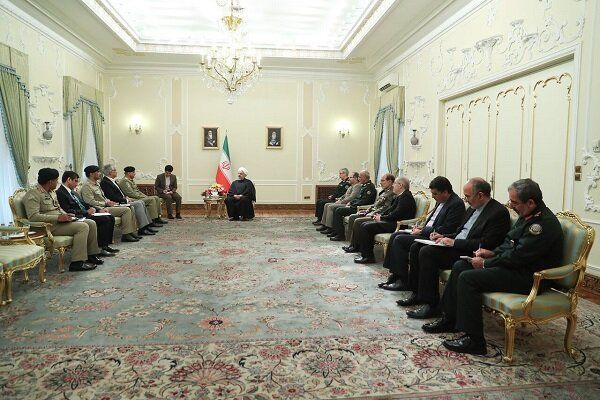 "Close relations between the Iranian and Pakistani nations is a valuable asset that can be used to further develop relations in different fields of mutual interest,” Rouhani said in a meeting with Pakistan’s Chief of Army Staff Qamar Javed Bajwa on Tuesday.

"Tehran-Islamabad relations must develop more than the current state,” he added.

Referring to a long-delayed gas pipeline project between the two countries, Rouhani said, "The Islamic Republic of Iran has laid the Peace Pipelines to the Pakistani border and we are completely ready to boost cooperation in this regard.”

On the importance of security in borders, he said, "Fortunately, we are witnessing positive developments in this regard and we are confident that with the determination in both sides, we can well confront smuggling and smugglers.”

Rouhani also referred to the recent regional developments, saying, "We believe that in regional issues and relations, all countries must cooperate in establishing peace and security.”

Referring to the current state of affairs in Afghanistan, the President said, "We all know that the solution is the cooperation of all groups and different ethnic groups in determining the future of the country, and it is the people of Afghanistan who can decide without the interference of foreign powers.”

“Without a doubt, the United States’ military presence and base in Afghanistan has boosted up its issues,” he said.

Rouhani also said, “The Islamic Republic of Iran and Pakistan have very good potentials and opportunities to develop relations and cooperation.”

Referring to the Pakistani Army Chief’s visit to Tehran, he said, "This means that there are strong relations between the two countries”.

The Chief of Army Staff of the Pakistan Army, for his part, said, “No country can undermine the good relations between Pakistan and Iran.”

“Pakistan will use all potentials and different methods to further deepen the trade and economic cooperation, and is ready to promote its current cooperation,” he said.