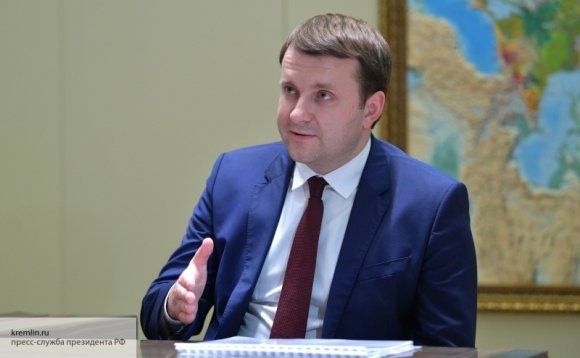 "I appreciate the full house here, I am glad to welcome all our Azerbaijani friends at the opening of the 10th Russia-Azerbaijan Interregional Forum. You are well aware that we attach great value to the traditional friendly relations that have been established between Russia and Azerbaijan at the level of the leaderships, governments, companies working together and achieving successful results, and, of course, at the regional level," he said in the first place.

"At present, about 70 subjects of the Russian Federation are involved in foreign trade with Azerbaijan, today about 30 regions - those most engaged in economic activities with Azerbaijan - are presented in the room," Maxim Oreshkin said.

"At the intergovernmental level, our joint work was organized on five road maps signed following the talks between the presidents of Russia and Azerbaijan on September 1 last year. On the eve, an agreement was reached in the sphere of advanced technology. In general, the agenda affects almost all areas of economic cooperation between Russia and Azerbaijan. It's great that these are not just plans, but real cooperation: our trade turnover has grown by 26% over a nine-month period this year. In general, our turnover with the CIS and the Eurasian Economic Community almost hasn't increased, so 26% is a radical difference," the minister drew attention.

"We see the active work of business and regions, which allows us to bring the economic activity to a qualitatively different level. It's not just about turnover: indicators for services, tourism, money transfers are growing steadily, which means that relations between our economies are strengthening. The most important thing is that both Russia and Azerbaijan benefit from such dynamics," he stressed.

"At the same time, our entire analysis shows that this is not the limit. Azerbaijan occupies a leading position in the Russian market of agricultural products for certain types of goods, but it is obvious that there are perspectives for growth. One of these priorities is agriculture. In December, we will hold an intergovernmental commission in Baku and I will be happy to visit this beautiful city once again," Maxim Oreshkin said.

The minister also listed the projects that have been implemented or are underway. "For example, the SOCARPolymer polypropylene plant. The construction of the GAZ plant is in the final stage, I hope it will be possible to launch it during the visit in December," the Russian Minister of Economic Development noted.

"Another company is scheduled to be opened - Hayat Pharm's pharmaceutical production. The construction of the Astrakhan business center is also underway in Azerbaijan. Last year, the Heydar Aliyev Azerbaijan Business Center was opened in Astrakhan," Maxim Oreshkin pointed out.

"Another important topic is further development of the transport and logistics sphere. Azerbaijan is finishing the construction of a four-lane road to the Russian border," he said.

"This year, the number of Russian tourists visiting Azerbaijan can hit the one million tourists mark. This is a very significant number. At the same time, we see a great interest in tourism in Russia from Azerbaijani citizens," Maxim Oreshkin added.

"Concluding my speech, I’ll say that the strategic partnership of our countries is gaining new momentum. The relations of the presidents are at a very high level. Their last meeting in Sochi, in which I participated, was very warm and aimed at practical results in all areas of cooperation. I repeat once again that regional cooperation is extremely important. We see that the authorities of the Russian and Azerbaijani regions interact very closely," the Russian Minister of Economic Development concluded.

The 10th Russia-Azerbaijan Interregional Forum is held in Moscow on November 22-23. The event is co-organized by the Russian Ministry of Economic Development and Azerbaijan’s Ministry of Economy. The forum is attended by Azerbaijani First Vice President Mehriban Aliyeva, the Russian Federation Council Chairwoman Valentina Matvienko, Russian Minister of Economic Development Maxim Oreshkin and Azerbaijani Minister of Economy Mikayil Jabbarov, Russian governors and heads of executive authority of Azerbaijani cities and regions, as well as businessmen from both countries.