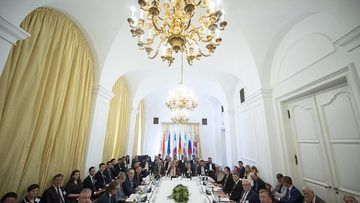 Finland, Belgium, Denmark, Netherlands, Norway, and Sweden will join the INSTEX mechanism for trade with Iran, the six countries declared in a joint statement on Friday (29 November) ahead of further talks between parties to the Iran nuclear deal in Vienna next week. Eurasia Diary reports citing Vestnik Kavkaza.

In reaction to EU statements calling for “maximum restraint” handling the protests, Tehran said Europe should refrain from intervening in Iran’s affairs and instead focus on delivering promises under the 2015 nuclear deal.

Iran’s economy has been battered since May last year when President Donald Trump unilaterally withdrew the US from the 2015 nuclear deal, the Joint Comprehensive Plan of Action (JCPOA). The plan was signed in 2015 by Iran, China, France, Germany, Russia, UK, US, Germany, and the EU, and hit Iran with sanctions.

The accord required Iran to scale back its nuclear programme and considerably downgrade its uranium reserves in exchange for sanctions relief.

European efforts to ensure that Iran can keep trading in spite of the sanctions have had little impact. “In light of the continuous European support for the agreement and the ongoing efforts to implement the economic part of it and to facilitate legitimate trade between Europe and Iran, we are now in the process of becoming shareholders of the Instrument in Support of Trade Exchanges (INSTEX) subject to completion of national procedures,” the joint statement said.

INSTEX was born as the brainchild of France, Germany and the UK in January 2019. It was created as a special purpose vehicle to help EU companies do business with Iran and facilitate non-USD transactions to avoid breaking US sanctions against the country.

Following a meeting of the Joint Commission of the JCPOA in June, EU’s foreign affairs chief, Federica Mogherini, said that the purpose of INSTEX is to facilitate “legitimate trade” with Iran for any EU member and that it has been conceived to be open to non-EU countries.

The six EU member states joining the mechanism reiterated that they “attach the utmost importance to the preservation and full implementation of the Joint Comprehensive Plan of Action (JCPoA) on Iran’s nuclear programme by all parties involved”.

They also urged Iran to return without delay to full compliance with the terms and provisions of the nuclear agreement. After the US withdrawal, Tehran began gradually abandoning its JCPOA obligations. In May this year, Iran warned it would gradually abandon its nuclear commitments every 60 days.

Iran announced publicly last week it would resume low-grade uranium enrichment at its underground Fordow nuclear plant, a site ringed by anti-aircraft guns, and this was confirmed by findings of the latest International Atomic Energy Agency (IAEA).

The UN’s nuclear watchdog said in a recent report that it had detected uranium particles at an undeclared site in Iran, revealing even more cracks in the accord. The report further concluded that Iran had prepared a new facility for testing enrichment centrifuges – effectively violating the provisions laid down in the 2015 nuclear accord.

A few days ago, Iran’s deputy foreign minister, Gholamreza Ansar, announced that Iranian and European diplomats will continue talks on INSTEX, the EU financial mechanism for trade with Iran, in the coming weeks. The Commission on the implementation of the Iran nuclear deal is set to meet for talks in Vienna next week.