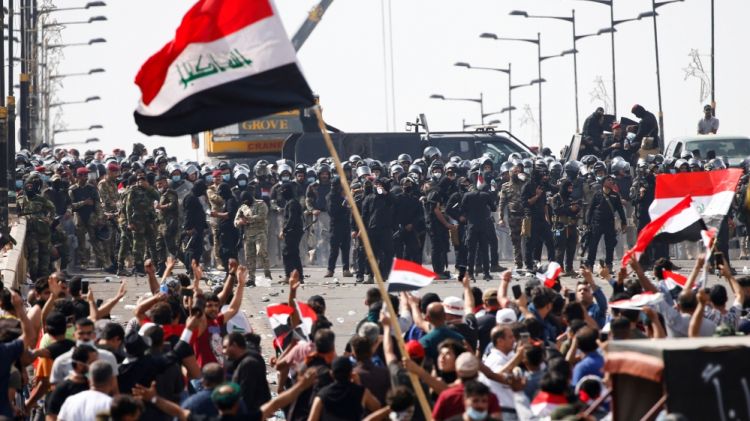 Iraqi legislators approved Prime Minister Adel Abdul Mahdi's resignation on Sunday during a parliament session held in the capital Baghdad amid weeks of deadly anti-government protests, Eurasia Diary reports citing Aljazeera.
An embattled Abdul Mahdi had announced on Friday that he would quit, after 50 demonstrators were killed the previous day by security forces in Baghdad and Iraq's mainly Shia southern cities of Nasiriya and Najaf.
The prime minister also faced criticism from Iraq's top Shia leader, Ayatollah Ali al-Sistani, who condemned the use of lethal force against the protesters and called for a new government.
A cabinet meeting on Saturday had approved Abdul Mahdi's announcement, which also suggested the resignation of key members of the Iraqi government, including the prime minister's chief of staff.
Caretaker government
Legal experts told Al Jazeera that the government would assume a caretaker role for 30 days or until the largest bloc in parliament agrees on a new candidate to replace him.
"Based on the constitution, this resignation includes the whole government - ministers and the deputy prime minister," legal expert Tareq Harb told Al Jazeera.
"The government has now become a caretaker government which will only address urgent issues until a new government is elected," he added.
"The largest political bloc or alliance will have 15 days to nominate a candidate which the president will then assign to form a new government within 30 days," Harb told Al Jazeera. "This new cabinet will then be voted on by parliament which needs an absolute majority to be voted in."
But with no bloc officially designated as the largest in parliament, it could take weeks for a new prime minister to be nominated.
"A caretaker government [under Abdul Mahdi's leadership] will continue until the political blocs select a new prime minister," Ahmed al-Inazi, legal expert at the Iraqi Legal Development Centre, said.
'Drop in the ocean'
Although Abdul Mahdi's resignation was welcomed by protesters in Baghdad's Tahrir Square, they said they will continue to demonstrate until they see a complete overhaul of the country's political system.
"The prime minister's resignation is only a drop in the ocean of our demands," said Dania, a 20-year-old IT student at Nahrayn Univeristy, who has been attending demonstrations since early October.
"We won't go back home until the PM's resignation triggers the parliament to be dissolved and early elections are held so that all the political parties and militias currently in power could be removed," she explained, adding that the process must begin with a new electoral law.
Driven by anger over corruption, high unemployment, inadequate public services and perceived foreign meddling in Iraqi affairs, demonstrators in Baghdad and several southern cities have been taking to the streets since early October 1, protesting against the country's ruling class and calling for the overhaul of the political system established after the 2003 US-led invasion, whereby power is apportioned among ethnic and sectarian groups.
Many Iraqis believe that this quota-based system allowed certain individuals and groups over years to enrich themselves and expand their influence, while much of the oil-rich country's population endured economic hardship.
According to the Iraqi Human Rights Commission, at least 430 people have been killed and 19,000 injured since the start of the unrest.
Separately, a court in Wisat province sentenced a police officer to death for his role in the killings of protesters, in the first such sentence since the beginning of the uprising. Another officer was sentenced to seven years over the deaths on November 2.
Later on Sunday, protesters set fire to the Iranian consulate in Najaf for the second time in a week, security sources and witnesses told Al Jazeera, rising anti-Iranian sentiment among demonstrators.
Fanar al-Haddad, research fellow at the Middle East Institute at the University of Singapore told Al Jazeera that "public sentiment has reached a point where it cannot be placated by piecemeal or cosmetic changes.
"If all that the political class can offer is a rearranged constellation of the same faces, there will be more public anger and a possible escalation of protests," he added.
Political tug of war
While the largest political bloc will have the right to decide on Abdul Mahdi's replacement, Iraqi parliamentarians and experts expect a "political tug of war" to unfold as parliamentary blocs try to forge alliances among each other.
"It is unclear how a new government will be formed," said Haddad. "Will another consensus government emerge?" he asked. "Or can a group or constellation of political actors form a majority government and an opposition? All this remains to be seen."
Political analyst Ziad Al-Arrar said that "after the acceptance of the prime minister’s resignation, the Shia political blocs will try to overcome their differences so they can agree on a new prime minister."
"Reaching this point will also require that the Kurds and the Sunnis agree to this new name," he added.
Elections in May 2018 ended without a single bloc winning a majority of seats to select a new prime minister.
To avoid a political crisis, parliament's two main political blocs - Sairoon, led by Shia leader Muqtada al-Sadr, and the Fatah bloc led by Hadi al-Amiri and linked to the Iran-backed Popular Mobilisation Units (PMF) - eventually forged an alliance, nominating Abdul Mahdi as prime minister.
But since the protests began, parliament has been deeply divided with Sadr going back and forth on his position to back the protesters, while Fatah, the second largest bloc in parliament, has backed the government.
"There will be an ongoing political tug of war and manoeuvring like what we saw following the elections in May last year," Harb told Al Jazeera, adding that negotiations may leave Abdul Mahdi's government in a caretaker role for a longer time period than expected.