Azerbaijan has right to use its armed forces to take back its legally acknowledged territory - British journalist
Read: 3169 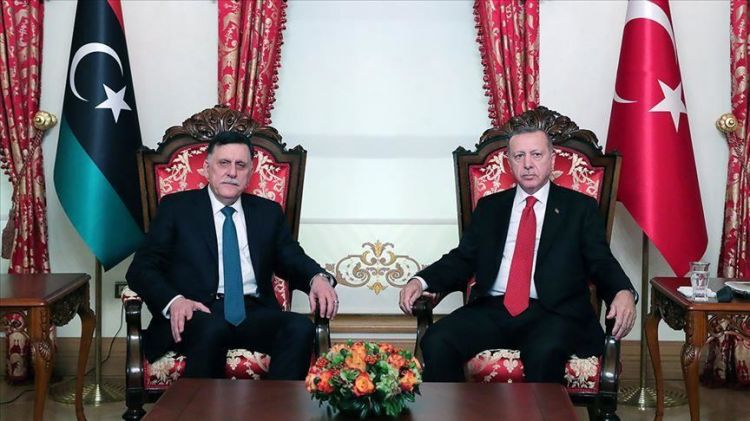 The agreement, Restriction of Marine Jurisdictions, determined a portion of Turkey’s maritime jurisdictions in the region and aimed at strengthening cooperation between Ankara and Tripoli.

On Nov. 27, Turkish President Recep Tayyip Erdogan held a closed meeting that lasted 2 hours and 15 minutes with Fayez al-Sarraj, chairman of Presidential Council of Libya, at the Dolmabahce Palace in Istanbul.

Prior to the agreement, Turkey had repeatedly invited all parties to negotiations for a consensus based on equity and remains ready for negotiations.

Ankara holds the position that the Greek Cypriot administration is not entitled to negotiate and conclude international agreements on its own and on behalf of the entire island.

Turkey, as a guarantor nation for the TRNC, is currently carrying out hydrocarbon exploration activities in the Eastern Mediterranean within the borders of the continental shelf of the TRNC.

Since spring this year, Ankara has sent two drilling vessels -- the Fatih and more recently the Yavuz -- to the Eastern Mediterranean, asserting Turkey and the TRNC's right to energy resources in the region.

Turkey’s first seismic vessel -- the Barbaros Hayrettin Pasa, which was purchased from Norway in 2013 -- has been conducting exploration in the Mediterranean since April 2017.

Turkey’s policy regarding hydrocarbon reserves in the Eastern Mediterranean region was based on equal share among regional countries, whereas some countries sought to raise tension.

Libya’s neighbor Egypt and Greece have denounced the agreement.

Responding to the statements by Egypt and Greece, the Turkish Foreign Ministry said: ''However, instead of engaging in negotiations in response to Turkey’s international law and equity-based approach, the parties only preferred to take unilateral steps and try to shift blame on Turkey.”

Turkey stressed that any delimitation exercise in the Eastern Mediterranean needs to take into account the legal rights and legitimate interests of the country.

In 1974, following a coup aiming at Cyprus’ annexation by Greece, Ankara had to intervene as a guarantor power. In 1983, the TRNC was founded.

The decades since have seen several attempts to resolve the Cyprus dispute, all ending in failure. The latest one, held with the participation of the guarantor countries -- Turkey, Greece and the U.K. -- ended in 2017 in Switzerland.