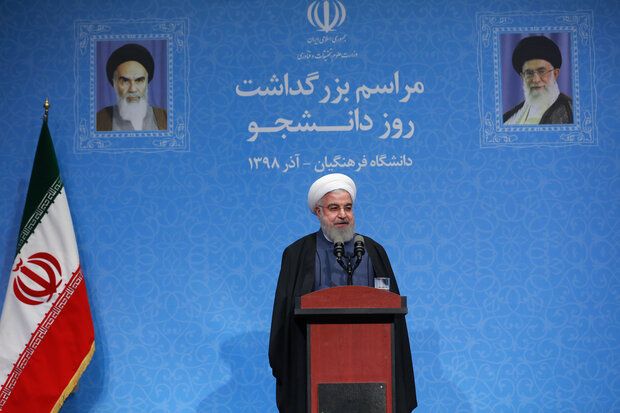 “The enemy is seeking to put pressure on our people; our nation is showing resistance but this doesn’t mean that we should not take a path which can foil enemies’ plots. Negotiation is necessary and a revolutionary act,” he said while addressing students of Farhangian University in Tehran on Sunday.

The president added, however, that the next year’s budget does not rely on the outcome of ‘negotiations’ in any sector, and that the budget was drawn up with considerations to the country’s condition under sanctions.

Tehran has stressed that it has not closed the window of negotiations with other countries. Rouhani said last week that negotiations are possible once US removes its unjust sanctions against the country, noting that even P5+1 summit can be held afterwards.

Washington, under the Trump Administration, unilaterally withdrew from the agreement in 2018, and re-imposed sanctions against Iran, forcing the European sides to the deal to stop doing business with Iran in fear of repercussions of secondary sanctions. A year after the US’ withdrawal, Iran began taking measures to reduce its commitments to the JCPOA in a bid to create a balance between its rights and obligations and also to encourage the other parties to live up to their own share of commitments to keep the agreement alive.

Rouhani added on Monday that US’s ‘anger’ towards the deal proves that JCPOA was to the benefit of Iran. Answering a student’s question on why Iran had put trust in the US, Rouhani said “we didn’t place any trust in America; we told them that we would sign the deal after it is approved by the United Nations; we did our job right.”

“Just see how much America is angry at the JCPOA,” he said, pointing to remarks by a US official who had voiced concern over Iran’s ability to buy and sell arms in the coming months as the UN embargo is going to be lifted.

The US Secretary of State Mike Pompeo is angry at Europeans for failing to adopt any measure against Iran’s reduction of commitments, said Rouhani, adding, “this shows that the JCPOA was to our benefit.”

He said that the JCPOA was neither ‘sacred’ nor ‘damned’, but “an international agreement which we should try to reap benefits from.”