Armenia-Azerbaijan conflict must be resolved on the basis of the territorial integrity of Azerbaijan - President Ilham Aliyev
Read: 289

In 2018, Russia and Japan were closest to signing peace treaty
Read: 245 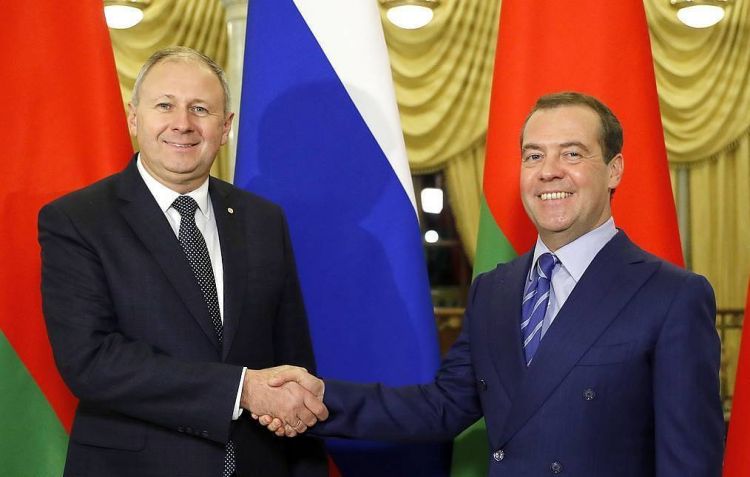 Prime ministers of Russia and Belarus have discussed the issues of bilateral cooperation in the integration field as well as trade and economic area, including a number of issues related to the energy dialogue, in a telephone conversation initiated by Minsk, press service of Russia’s cabinet of ministers said in a statement on Saturday, Eurasia Diary reports citing Tass News.

"Russian Prime Minister Dmitry Medvedev and Belarusian Prime Minister Sergei Rumas considered the practical aspects of the Russian-Belarusian cooperation in the integration field and in the trade and economic area, including several issues of the energy dialogue, in a telephone conversation," the statement said.

The sides also discussed the dates of future governmental contacts.

On December 8, Minsk and Moscow marked the 20th anniversary of the signing of the treaty to create the Union State of Russia and Belarus. Minsk and Moscow planned to approve the program to deepen integration consisting of 31 integration roadmaps by that landmark date. The two countries’ governments had prepared issues, on which no agreements were made, for presidents’ consideration. On December 7, Russian President Vladimir Putin and his Belarusian counterpart Alexander Lukashenko held an hours-long meeting in Sochi, which demonstrated that the number of divisive issues related to integration decreased, with eight roadmaps left unapproved.

The main controversy between the sides in the integration talks concerns the price of the Russian gas for the republic in 2020 and compensation for Minsk’s losses as a result of the tax maneuver in Russia’s oil sector.

Following a telephone conversation with PM Medvedev on December 10, Lukashenko said he could meet with Putin after December 20. Belarusian President also announced plans to meet Medvedev by the end of the year, probably in Minsk.