Lies in data and history - Armenia's cheats once more exposed 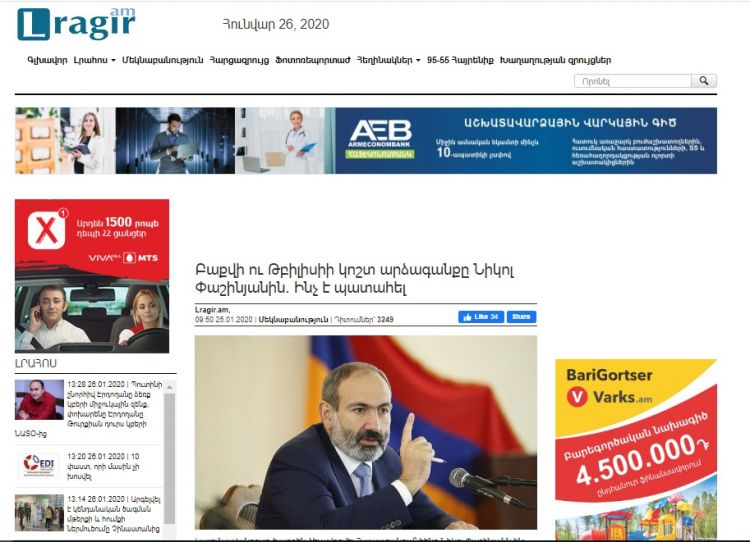 Armenia is going to acknowledge how it is losing opportunities to pull the country's demising economy out of recessions. No doubt that it stands far behind its neighbours in the Caucasus region and the government of Armenia is desperately seeking ways through its emerging poverty.

Recently, Armenian media straightforwardly reacted to Nikol Pashinyan's statement outlining some illusive digital data which also caused a bounce back from the neighbours - Tbilisi and Baku. According to what Amenian PM says through the data, it only makes you feel no more than amused. Pashinyan rhetorically stresses its country being the top leading country in the economy and politics. Being honest, the Armenian government is further dreaming about surreality, if referred to the media report, in which slammed the PM's method of making such statistics.

According to Armenian media analysis, they think this is good and makes the prime minister and the government to be stuck by thorns, especially since statistics are always ambiguous. Also, the heated "debates" of the government and its opponents have already crossed the borders of Armenia and have caused a regional scandal, gaining a noteworthy political backdrop.

Looking though Nikol Pashinyan's latest International Monetary Fund Gross Domestic Product (IMF GDP) data through which states that "Armenia has already surpassed Georgia and will soon be ahead of Azerbaijan" had a fierce response in Georgia, with the country's Minister of Economy responding rather harshly, saying that they had presented the IMF with a different methodology, and the IMF's new report would already be different.
Baku's response was not delayed either, and the President of Azerbaijan Ilham Aliyev himself reacted, too.
As mentioned before, the report in Armenian media said those responses could be linked to the ambiguity of statistical numbers. Yes, that is true, because such a fierce response gives rise to deepening political issues as they already confirmed themselves.
Given the statement of Nikol Pashinyan, Armenia once again ridiculed itself before the eyes of the world.  Armenia shouldn't forget the huge advantages of two neighbouring countries over its limited economy and boundaries.
First of all, Armenina is totally isolated in the region due to lacking geostrategic opportunity, and admittedly Azerbaijan is further advantageous in political and economical relations with the closest neighbour Russia and other countries due to many splendid reasons. True - Armenia is limited in political, economical relations in the territory where it never belonged. They confess that they are devoid of many options to expand relations in the region, however they still continue to lie in the history same as they did exaggerate in their baseless and inadequate statistical report.
Besides that, the journalist's view in the article is interesting where he tries to fool his readers speking on behalf of the former Georgian president Mikhail Saakashvili as though he has sometime somewhere expressed in the "history" of Armenians during the reign of their "legendary Tigran, Georgia and the western Caspian territories were part of the Armenian kingdom". It once again shows Armenians still struggle to finish up faking their history showing exact historical details. Knowing that they have no facts in hands they hold back to tell own words and face the truth except hiding behind their patrons.
The journalist ends his article with the sentences below:
Armenia is trying to get out of the "third status". Armenia has other advantages that are more important than transit and oil. The Georgians and Turks in the Caspian know this well, don't we? Can we take advantage of this natural and inalienable advantage of ours, or will we continue the skirmishes of everyday life instead of serious political programs and debates, missing another chance?

These expressions reflect no more than hopelesness, because Armenia understands building dreams of kingdom on others' lands is pointless and has no future for them. However Armenia should accept the reality that the chnces are over for them unless they remove the status of occupant and beligerent country over themselves.