daily news
Roscosmos reacts Trump's decrees on exploitation of moon and other celestial bodies
Iran ready to cooperate with Turkey on fight against COVID-19 outbreak - Zarif
Coronavirus cases reach to 62,589 in Iran
Global deaths from coronavirus pass 75,000 mark
All border-crossing points between Georgia and Azerbaijan closed
“If we wait pandemic to appear, it will be late to prepare - George Bush warned of next Pandemic - VIDEO
Beijing resumes operations in South China Sea as US Navy struggles to cope with coronavirus
Turkey ‘neutralizes’ 9 YPG/PKK terrorists in N Syria
﻿

Iran urgently deployed dozens of missile systems on the coast of Strait of Hormuz
Read: 2524

US and its allies characterize Chinese and Russian aid as a political ploy to garner influence - US expert-Exclusive
Read: 1679 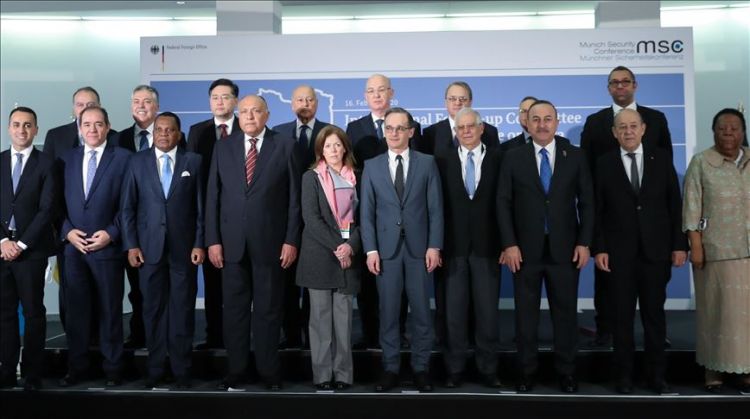 World powers and regional actors have launched on Sunday an international committee to oversee pledges made for an arms embargo and cease-fire in Libya, Eurasia Diary reports citing Anadolu Agency

Speaking to reporters after a meeting of more than a dozen foreign ministers and top diplomats in Munich, German Foreign Minister Heiko Maas said participants reaffirmed their commitment to the conclusions of the Berlin Conference last month.

"Today we launched the International Follow-up Committee on Libya [IFCL], and thereby we put into practice one of the most important conclusions of the Berlin Conference," he said.

"This committee would now work to ensure that all the conclusions of the Berlin Conference would really be implemented. At the same time, it would accompany the UN-led, intra-Libyan dialogue process, and support it in the best possible way," he added.

Maas said that the recently formed IFCL will be co-chaired by the UN and one of the participant states or organizations of the Berlin process.

As the next rotating co-chair, Italy will host a meeting of IFCL next month in Rome, he added.

Turkish Foreign Minister Mevlut Cavusoglu attended Sunday's Libya meeting in Munich, along with the foreign ministers of France, Italy and several countries from the region, at the invitation of Germany's top diplomat.

Foreign ministers from Egypt and the United Arab Emirates, the main supporters of Libyan warlord Khalifa Haftar, also took part in the meeting.

Last month, Germany hosted a summit in Berlin seeking international unity to support efforts for a political solution and cease-fire in Libya.

The Berlin Conference ended with pledges on cease-fire and arms embargo, and heads of states and governments agreed to set up a follow-up committee to discuss the implementation of the conference conclusions.

Since the ouster of late ruler Muammar Gaddafi in 2011, two seats of power have emerged in Libya: warlord Khalifa Haftar in eastern Libya, supported mainly by Egypt and the United Arab Emirates, and the Government of National Accord (GNA) in Tripoli, which enjoys the UN and international recognition.

Libya's legitimate government had been under attack by Haftar since last April, claiming the lives of more than 1,000 people.