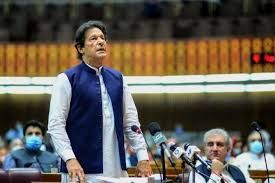 The US did not make the Pakistani government aware of its plans to take out the mastermind of the 9/11 terror attacks and Khan delivered a thinly veiled criticism of Washington during a speech in parliament, while also denouncing his predecessors' foreign policies.

Khan said he regretted Pakistan's partnership with the US in the war on terror and accused the White House of using abusive language against Islamabad in the past.

"We sided with the US in the War on Terror," Khan said, "but they came here and killed him, martyred him and ... used abusive language against us (and) did not inform us (of the raid), despite the fact that we lost 70,000 people in the war on terror."

Over the years Washington has repeatedly accused Pakistan of harboring terrorists, something Pakistan has repeatedly denied and Khan was keen to send a broadside in the direction of Washington. He told parliament: "The way we supported America in the war on terror, and the insults we had to face in return. They blamed us for every failure in Afghanistan. They openly held us responsible because they did not succeed in Afghanistan,'' Khan said.

However, opposition lawmaker Khwaja Mohammed Asif slammed Khan for calling bin Laden a martyr, saying the al-Qaida chief had brought terrorism to Pakistan. "He (bin Laden) ruined my country but he (Khan) is calling him a martyr,'' Asif said.