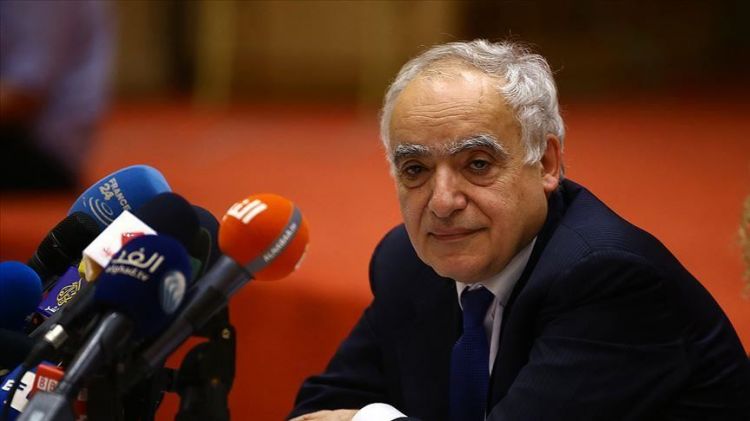 In recent remarks, the UN's former Libya envoy denied any involvement of his mission in supporting an attack by renegade general Khalifa Haftar on the war-torn North African country's capital, accusing instead members of the UN Security Council of backing the campaign on Tripoliç EDNeüsşnet reports citing Anadolu Agency.

UN Secretary-General Antonio Guterres was on an official visit to Tripoli on April 4, 2019, when Haftar launched his military campaign to capture the city.

Guterres, instead of cutting his visit short due to the attack, then traveled to Benghazi in eastern Libya, where he met with Haftar, sparking concerns of possible UN support for Haftar's move.

However, special envoy Ghassan Selame on Wednesday shined light upon the controversy -- though belatedly -- and cleared Guterres's position to the world as he stressed the distinction between the UN and the UN Security Council (UNSC).

In an interview with the Switzerland-based Centre for Humanitarian Dialogue, the Paris-born Lebanese diplomat -- who assumed his post as UN special envoy to Libya in June 2017 and resigned on March 2 -- criticized the UNSC's position in the Libyan conflict.

Guterres was visiting Libya for the final preparations to hold a National Conference which was supposed to bring all Libyan sides together for dialogue with the aim to end the rift between the internationally recognized government in Tripoli and Haftar's eastern-Libya-based forces. The conference was expected to determine the dates of nationwide parliamentary and presidential elections.

He traveled in person to Tripoli, regardless of the conflict, to use his political weight and help the chances of the conference's success.

While the Libyan government was preparing for the conference, Haftar suddenly pressed the button on his military campaign. Taken by surprise in the onslaught, the government became a victim of the Security Council members' "hypocrisy," with no sanctions imposed on Haftar, nor any condemnation against the attack.

Salame criticized the Security Council's position in Libya, saying that "important countries not only were supporting the attack on Tripoli, but were plotting exactly against the holding of the National Conference -- did not want it to happen."

Salame said he felt "stabbed in the back" by most of the members of the Security Council, because "the day he attacked Tripoli, Haftar had most of them supporting him."

The former special representative underlined that the leaders of these countries "did not have conscience" as they could have saved people's lives.

The leaders of these countries played with the future of the people, at the expense of the Libyans said Salame, adding that the "hypocrisy" of the countries that supported Haftar caused bloodshed in Libya for 14 months.

Russia, France and the US

Though the UK had submitted a draft resolution to the Security Council to condemn Haftar's attack and propose a cease-fire, Russia, the US and France had not supported the proposal at the time, giving the green light for Haftar to attack Tripoli.

Haftar was not alone in his campaign the would have crushed Libyans' aspirations for peace, freedom and democracy. He enjoyed the support of these three countries and their Security Council veto rights, as well as regional allies such as Saudi Arabia, the UAE, Egypt, Jordan and Bahrain.

Countries that were pretending to support the National Conference in Libya were at the same time approving Haftar's attack on the country's capital.

Libya has been torn by a civil war since the ouster of Muammar Gaddafi in 2011. The country's new government was founded in 2015 under a UN-led agreement, but efforts for a long-term political settlement failed due to a military offensive by Haftar's forces.

The UN recognizes the Libyan government headed by Fayez al-Sarraj as the country's legitimate authority.

The government launched Operation Peace Storm against Haftar in March to counter his attacks on the capital, Tripoli, and recently liberated strategic locations including al-Watiya airbase and the city of Tarhuna, Haftar's final stronghold in western Libya.