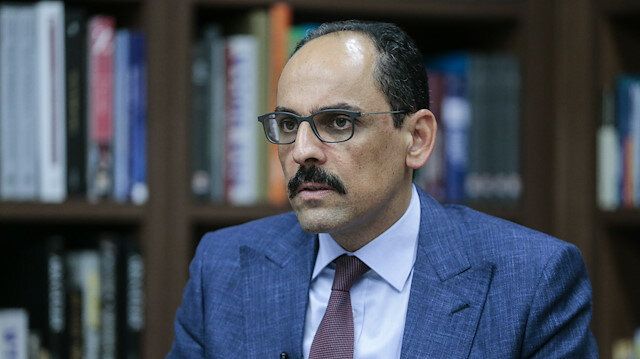 Turkey is working to establish stability in the region, including through supporting Libya's legitimate government, as Turkey's security is directly connected to its neighbors’ security and to issues in the Mediterranean, according to presidential spokesman Ibrahim Kalin, EDNews.net reports citing Yeni Safak.

“When it comes to Turkey’s security, it is also about the security of Iraq, the security of Iran, as well as of all our neighbors and the issues in the Mediterranean,” Kalin told Anadolu Agency, explaining how in our era national security cannot be provided just within national borders, as security is a global issue.

“Libya is our maritime neighbor across the Mediterranean,” Kalin said, also highlighting how Turkey’s geographical location extends to Central Asia, from the Middle East to North Africa and the Caucasus.

“The tiniest crisis, tension, clash, or war in these regions will directly affect Turkey’s security,” he said.

The effect may come in the form of terrorism, migration, or something else, he said, adding that the country has seen this “so many times.”

“Issues in Libya directly concern the security of both the Mediterranean and NATO,” Kalin noted.

Libya has been torn by a civil war since the ouster of Muammar Gaddafi in 2011. The country's new government was founded in 2015 under a UN-led agreement, but efforts for a long-term political settlement failed due to a military offensive by warlord Khalifa Haftar's forces.

The UN recognizes the Libyan government headed by Fayez al-Sarraj as the country's legitimate authority, as Tripoli battles Haftar's militias.

In a counteroffensive against Haftar's attacks on the capital Tripoli and elsewhere, government forces recently liberated strategic locations, including Al-Watiya airbase and the city of Tarhuna, Haftar's last stronghold in western Libya.

‘History of foreign interference in Syria repeating itself in Libya’

Kalin urged that all international actors establish relations with Libya’s legitimate government recognized by the UN.

While many countries, including the US, failed to forge ties with the al-Sarraj government, Turkey’s support both on the ground and diplomatic areas started to alter this balance, according to Kalin.

“Of course, we never want Libya to become a war zone for militias and foreign mercenaries,” he said, adding that for a political solution, those military solutions should "certainly" be left aside.

“But when we look at what international actors have unfortunately done in Syria, we see that a similar scene is slowly emerging in Libya,” he warned.

‘Clear in Libya who wants peace and who wants war’

Reiterating that Turkey’s support to Libya’s government in Tripoli will continue, Kalin said a recent attack on the key al-Watiya airbase was done by Haftar’s forces.

“It is known that the Haftar side did it,” he said, adding that despite various reports claiming various countries were responsible, “another truth was revealed by this attack; it is obvious who really wants peace and stability there, and who wants the continuation of clashes.”

No casualties were reported following the incident, but some equipment recently brought to boost the airbase’s air-defense capabilities was damaged.

The overnight attacks were the first since the Libyan Army captured the airbase from Haftar’s militia in May.