The desecration of Azerbaijani historical buildings and cemeteries is indicative of Armenian hatred - British Journalist
Read: 456

Activities on provision of peacekeeping contingent of Russia are being held - Azerbaijan`s Defense Ministry - PHOTOS
Read: 266

Design work has begun on the construction of another highway in the territories liberated from the occupation
Read: 264

"I am very glad to announce that, Lachin region has been liberated from occupation." - Azerbaijani President
Read: 199 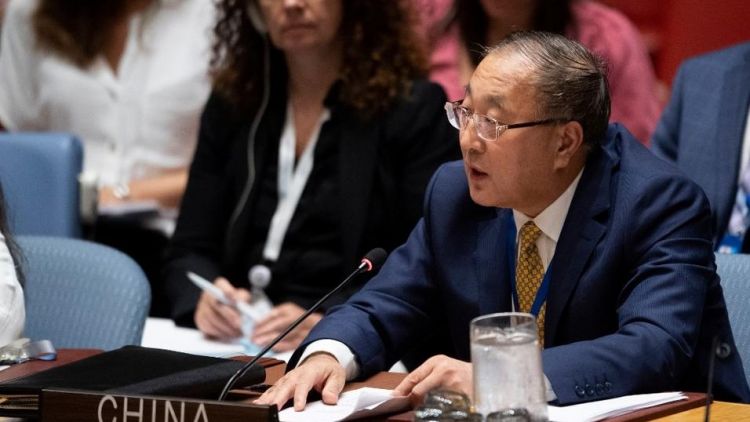 A Chinese envoy said Tuesday that China is deeply concerned about reports of the plan to annex part of the occupied Palestinian territory.=, EDNews.net reports citing China.org.

"Such a plan, if implemented, will seriously violate international law and relevant UN resolutions, and imperil the 'two-state solution.' We urge the relevant party to refrain from taking any unilateral actions, and do its best to de-escalate conflict and tension. It's also our firm position that no country should support unilateral actions," Zhang Jun, China's permanent representative to the United Nations, told the Security Council's virtual meeting on the situation in the Middle East.

"It is equally imperative to stop settlement activities, the demolition of Palestinian structures, and the violence against civilians. The Security Council should discharge its mandate, and play its part to ensure that its decisions, including Resolution 2334, are fully implemented," he added.

Speaking of the Middle East peace process, the ambassador said that it is a critical moment to advance the process and resume equal and meaningful peace talks between Palestine and Israel.

International agreements such as relevant UN resolutions, the "land for peace" principle and the two-state solution are important parameters in the Middle East peace process. They embodied the wisdom and hard work of several generations, and should be observed and implemented, he said.

"We call on the international community, especially countries having influence on Palestine and Israel, to stay impartial and just in promoting peace talks," the envoy added.

On the humanitarian situation in occupied Palestinian territory and the hardship Palestinian people are suffering, the ambassador said "we should never lose sight of" them.

"Continued blockade of Gaza Strip has aggravated the humanitarian situation on the ground. The suspension of bilateral agreements and coordination in response to the annexation plan have brought consequences felt by ordinary Palestinians. In addition, the COVID-19 pandemic further added up to Palestine's economic and social fragility," he said.

Stressing that the Middle East is now at a crossroads between peace and turbulence, Zhang said that the Security Council should and must stand with peace and justice, with righteousness and conscience, and play its active role in bringing about a comprehensive, just and enduring solution to the Palestine question.