Russia, together with Turkey, is ready to actively contribute to the establishment of political dialogue between Baku and Yerevan - Russian MFA | Eurasia Diary - ednews.net

- The Jordanian historian Al-Armouti, author of the book “The Kashmir Crisis” / Why has not the Organization of Islamic Cooperation exerted any effort for Palestine and Kashmir? - PHOTOS
Read: 590

Russia, together with Turkey, is ready to actively contribute to the establishment of political dialogue between Baku and Yerevan - Russian MFA 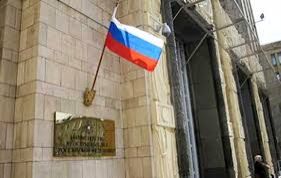 Russia, together with Turkey, is ready to actively contribute to the establishment of political dialogue between Baku and Yerevan.

According to AzerTag, the due statement came from the Deputy Head of Information and Press Department of the Russian Foreign Ministry Alexey Zaitsev while speaking at a briefing in Moscow.

“Russia is very concerned about the recent aggravation of the situation on the border of friendly Armenia and Azerbaijan. We are convinced that the long-term Nagorno-Karabakh conflict, like any other disagreements in the international arena, must be resolved exclusively by peaceful means, through diplomatic negotiations. Our position is invariably shared by the co-chairs of the OSCE Minsk Group - the United States and France, as well as in the UN, CIS, and other international organizations, ”he said.

Zaitsev recalled that the Russian leadership, including via prompt interaction with key partners in the region, has made all necessary efforts to prevent further escalation of the situation on the border. "During recent telephone conversations between Russian Foreign Minister Sergey Lavrov and his Azerbaijani and Armenian counterparts, we once again received assurances of support for any approach from Baku and Yerevan, discussed in detail with the Turkish side the current situation in Transcaucasia and specifically in the Nagorno-Karabakh settlement at the level of heads of state on July 27, at the level of foreign ministers on July 23," he added.

He stressed that Russia and Turkey both stating their serious concern over the dangerous developments in the region, proceed from the fact that there is no alternative to political and diplomatic solution to the problems based on the principles of international law and in the interests of the peoples of Azerbaijan and Armenia. "We are set to continue working together with our partners, including Turkey, to stabilize the overall situation in Transcaucasia, to actively promote the establishment of political dialogue between Yerevan and Baku," concluded the deputy head of the Department of Information and Press of the Russian Foreign Ministry.