'These people are criminals, not political prisoners' - Zurabishvili disagrees with US Senator | Eurasia Diary - ednews.net

Exclusive interview with the Head of the Representative Office of Rossotrudnichestvo in Azerbaijan - Irek Zinnurov - VIDEO
Read: 215

'These people are criminals, not political prisoners' - Zurabishvili disagrees with US Senator 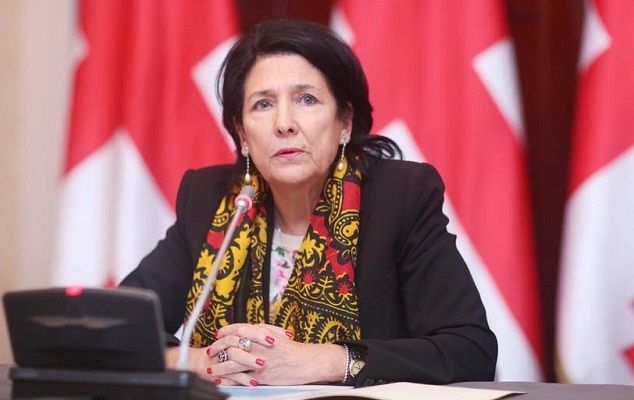 “There are no political prisoners in Georgia,” says Georgian President Salome Zurabishvili, responding to an appeal to her by the chairman of the US Senate Foreign Relations Committee, Jim Risch, who asked her to pardon Giorgi Rurua – a shareholder of opposition-minded TV channel Mtavari Arkhi, who was sentenced to four years. Risch called Rurua a political prisoner, EDNews.net reports citing Jam News.

“Rurua will not be pardoned,” Zurabishvili responded in a special statement on July 31.

Rurua was charged with illegal purchase and possession of weapons and on July 30, 2020, was sentenced to four years in prison.

However, Rurua’s release was part of a memorandum signed between the government and the opposition on March 8, 2020, through the mediation of several diplomats.

The memorandum was a long-awaited compromise in the confrontation between the authorities and the opposition over the electoral reform that lasted for over a year.

The authorities say they will not agree to election reform. The opposition says it won’t step back. A new protest has been announced on 25 November

For their part, the authorities agreed to include in the memorandum a clause on the release of political prisoners Gigi Ugulava, Irakli Okruashvili and Giorgi Rurua.

However, later the ruling Georgian Dream party refused to release these politicians. It was stated that the opposition is lying and that such an agreement cannot be reached for the simple reason that there are no political prisoners in Georgia.

After pressure from Western partners and a number of critical statements from international organizations, Georgian President Salome Zurabishvili nevertheless pardoned Gigi Ugulava and Irakli Okruashvili on May 15, 2020.

Giorgi Rurua, however, remained under investigation and has recently been imprisoned to four years.

“I am very concerned that Giorgi Rurua was convicted on bogus charges. The courts cannot be used for political purposes. The elections are approaching, and in order to soften the political polarization in the country, Rurua should be pardoned, as happened with Ugulava and Okruashvili,” Senator Risch said in an interview with Voice of America.

Earlier, US Ambassador to Georgia Kelly Degnan told reporters that the pardoning of Gigi Ugulava and Irakli Okruashvili was “a bold move aimed at depolarizing the political climate of the situation in Georgia.”

“These people are criminals, not political prisoners” – President of Georgia

“Three months ago I made a very difficult decision, unacceptable for many in society, when I pardoned two people [Ugulava and Okruashvili].

These people were not political prisoners, but criminals, but I forgave them,” the Georgian president said.

Salome Zurabishvili said she made this difficult decision in order to “not allow the forces that do not want elections or success for Georgia to destabilize the country.”

“Nobody and nothing will be able to influence my decision,” she stressed, saying that Giorgi Rurua will remain in prison.