Military exercises in the Caucasus: a war of nerves between Baku and Yerevan | Eurasia Diary - ednews.net

Is there any point in replacing the OSCE Minsk Group with another diplomatic mechanism? - The explanation by Azerbaijani expert
Read: 464

Military exercises in the Caucasus: a war of nerves between Baku and Yerevan 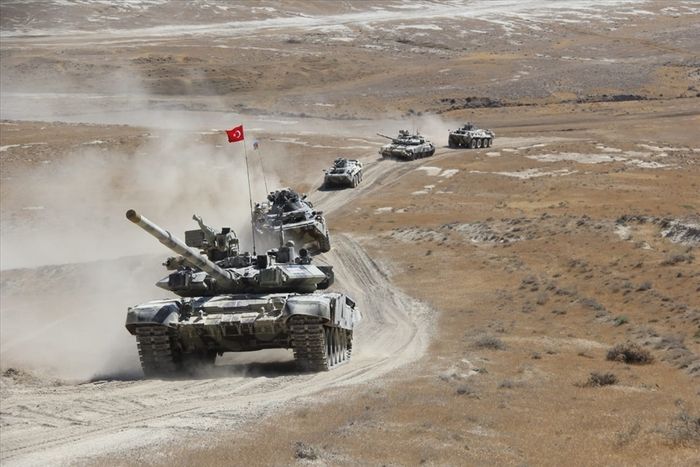 During the weekend, the secretary of the Armenian government’s Security Council Armen Grigoryan reaffirmed Yerevan’s serious concerns over Turkey’s support for Azerbaijan shown during and after recent deadly clashes on the Armenian-Azerbaijani border.

“Seeing that Azerbaijan is unable to keep the situation under control on its own, Turkey is trying to intervene. I think that this poses a serious threat to the region. It is also a challenge to the regional security architecture. The regional security architecture has long been unchanged. Turkey is now trying to change it through its intervention,” he said.

On 3 August, Armenia’s Ministry of Defense dismissed the information published by the Russian news website Lenta.ru that at least two Turkish F-16 fighter jets had approached the Armenian border and turned back only when they were 56 kilometres from Yerevan.

On 2 August, Interfax reported that Russian military, stationed in Armenia, carried out exercises amid deteriorating relations between Yerevan and Baku. More than one and a half thousand Russian servicemen, as well as more than 500 units of military equipment, took part in the joint exercises with Arminian military. MiG-29 fighter jets, Mi-24P, Mi-8MTV helicopters and combat drones were involved in these exercises. Armenia's ambassador to Moscow, Vardan Toganyan, said Yerevan was counting on Russia's help in resolving the conflict, as the situation on the border was developing "not in a very good way."

On 29 July, large scale military exercises between Azerbaijan and Turkey were launched as part of the Agreement on Military Cooperation between both countries. This comes after the Azerbaijani defence ministry announced that a group of servicemen and aircraft from the Turkish Armed Forces (TSK) were going to hold joint exercises. It was previously stated that according to the plan, exercises involving the land forces will be held from 1 to 5 August in Baku and Nakhchivan, and exercises with the participation of military aviation will be held from 29 July  to 10 August in Baku, Nakhchivan, Ganja, Kurdamir and Yevlakh. These drills were planned in advance

Ankara reiterated that it stands with Baku in these difficult times and warned Armenia to respect Azerbaijan's territorial integrity. Ankara voiced concern over the tension that has been ongoing since the invasion of Nagorno-Karabakh, which turned into a conflict with Armenia's "reckless and systematic attacks."

Most recently, Presidential Spokesperson Ibrahim Kalın reiterated Turkey's determination to support Azerbaijan in the face of Armenian aggression near the border. However, he did note that this does not mean Ankara has closed its doors on diplomatic communication channels.

The Armenian foreign ministry expressed concern at the exercises before the Armenian military put some of its forces on high alert. Defence Minister Davit Tonoyan said on 28 July that Armenian army units as well as a Russian-Armenian military contingent are “continuing to constantly monitor and analyse” Turkish-Azerbaijani military activities “with all reconnaissance means” at their disposal.

Russian President Vladimir Putin and his Turkish counterpart Recep Tayyip Erdogan discussed the Armenian-Azerbaijani flare-up during a phone conversation on 27 July. According to the Kremlin, Putin “stressed the importance of preventing any steps that could cause an escalation in tensions.”

The Baku officials pointed out that, prior to the Azerbaijani-Turkish drills, Armenia and Russia conducted on 23 July joint air defense drills which were focused on developing new methods of countering hostile unmanned aerial vehicles (UAVs). According to the Russian media, the drill was planned in advance. A day before these drills, Azerbaijani officials said that it had downed an Armenian X-55 tactical fixed-wing drone on a reconnaissance mission, which was the third Armenian UAV to go down in the past two days.

This article is published in Caucasus Watch.