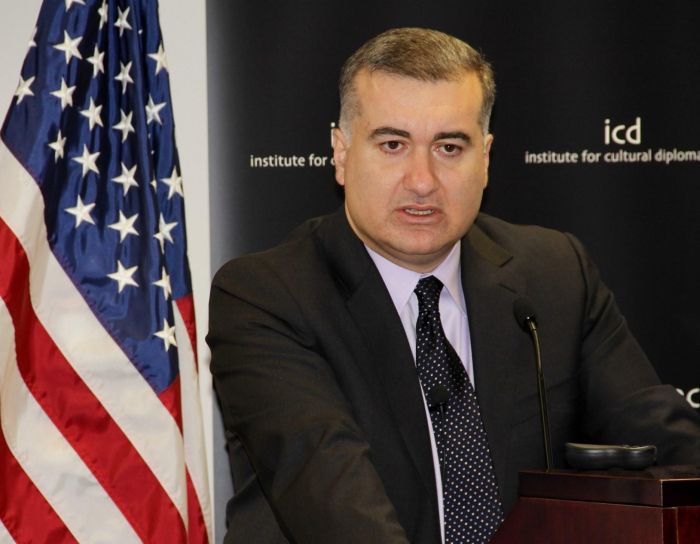 Armenia’s recent actions and statements clearly damage the established negotiation format and undermine any realistic prospects for the peace process, Azerbaijani Ambassador to the U.S. Elin Suleymanov said in his article published by Newsmax media outlet.

He noted that Armenia’s recent military provocations against Azerbaijan came at the height of the COVID-19 pandemic in the region with health and safety of citizens at the top of most governments’ agenda.

“However, Armenia’s own COVID-19 crisis did not prevent its military from launching an attack against Azerbaijan in the Tovuz region across the international border between the two nations. The location of Armenia’s attack hundreds of miles north from the line of contact in the occupied territories of Azerbaijan, where Armenian and Azerbaijani forces have been facing each other for some three-decades, speaks volumes about the intentions behind this latest act of aggression.” the ambassador wrote.

The diplomat called the protracted Armenia-Azerbaijan conflict a major threat to peace and security in greater Eurasia.

He reminded that Armenia’s illegal occupation and ethnic cleansing campaign of about 20 % of Azerbaijan’s internationally-recognized territory has caused a significant humanitarian challenge by displacing a million people.

“Now, 30 years later, the internally displaced persons still live in exile unable to return to their homes,” Suleymanov said. “In spite of the four United Nations Security Council resolutions and numerous other international documents calling for immediate withdrawal of Armenian troops, Armenia continues to defy basic principles of international law and negotiation efforts by the OSCE Minsk Group co-chaired by France, Russia and the United States.”

He emphasized that Armenia’s recent actions and statements clearly damage the established negotiation format and undermine any realistic prospects for the peace process.

“Although formally independent, Armenia has never really acquired full sovereignty due to its constant conflicts with neighbors and external dependencies. Its borders are guarded by Russian border guards, it has a foreign military base on its territory and it has minimal control over its own economy,” the ambassador added.

Today, Armenia remains one of the last relics of the Soviet past in the region offering little strategic value and unable to move forward towards integration and growth, the ambassador noted.

“Similarly, Armenian society continues to be plagued by its poor record on anti-Semitism and its uneasy relationship with Nazi collaborators and Middle Eastern terrorist groups. With a high ratio of emigration, Armenia was recently ranked as the angriest nation globally. Some of this anger spills outside Armenia’s borders.”

Suleymanov also recalled that in July, the Los Angeles Police Department has launched a hate-crimes investigation of several Armenian radicals, who violently attacked and injured a much smaller group of Azerbaijani-Americans during a protest in front of the Azerbaijani Consulate General in Los Angeles. “A quick look at the map would reveal that Armenia’s reckless militarism has much wider ramifications.”

The diplomat continued: “The South Caucasus region includes Armenia, Azerbaijan and Georgia and is a key strategic area of the world. For instance, Azerbaijan, which is the only nation in the world that border both Russia and Iran, is also an important partner and friend of Israel. Moreover, Azerbaijan provides the unique connection between Europe and Asia across the energy-rich Caspian Sea and its capital city of Baku is the origination point of the strategic Baku-Tbilisi-Ceyhan oil pipeline, which provides some 40% of Israel’s annual oil supply and was once featured in the James Bond film, "The World is Not Enough."

He stressed that the Southern Gas Corridor, a project that spans six nations from Azerbaijan to Georgia, Turkey, Greece, Albania and Italy and is vital for Europe’s energy security, also begins just south of Baku.

“These pipelines along with the railways connecting Asia to Europe and the critical overflight corridor for NATO aircraft transiting to and from Afghanistan all pass in the vicinity of the area attacked by Armenia. Unable to add any value to development and cooperation Armenia chose to reassert its relevance by threatening regional security and energy infrastructure of global significance. Just months before the Southern Gas Corridor is fully operational, Armenian military attacks some 15 miles from its route,” he added.

Along the border, Armenia attacked the area, where Azerbaijan has been de-escalating by replacing its Army units with lighter armed border guards, and shelled residential houses causing casualties and damage, the ambassador stressed.

“By striking across the international border far away from the line of contact of the two militaries, Armenia also hoped to trigger support from its treaty allies under the auspices of the Collective Security Treaty Organization (CSTO) including Russia and a number of other post-Soviet states,” Suleymanov said. “This attempt to enlarge the scope of the conflict failed and the CSTO rejected Armenia’s request for support since it was obvious who initiated the hostilities.”

He noted that Armenia’s leaders could have heeded Secretary Pompeo’s call for substantive peace talks and engage in meaningful negotiations with Azerbaijan to ensure a brighter future for the Armenian people and a lasting peace for the entire South Caucasus.

“Instead, Armenia once again acted as a rogue player and a proxy by attacking the key elements of prosperity and security architecture for the region and beyond. The international community should help people of Armenia by explaining to their leaders that the dividends of peace are abundant and the costs of aggression continue to rise,” the ambassador concluded.

It is originally published in News.az