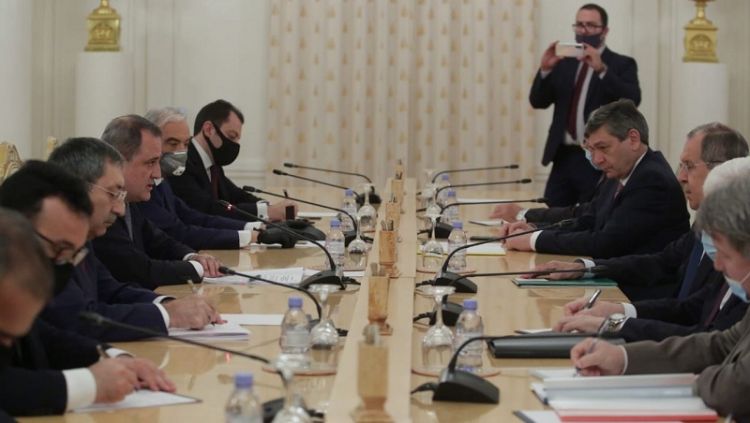 After the tête-a-tête meeting, the sides had a meeting in an expanded format with the participation of delegations from both sides.
The sides discussed the prospects for cooperation in various areas on the bilateral agenda, including political, economic, trade, humanitarian, cultural, and other spheres. It was noted that the close contacts and reciprocal visits between the leaders of the two countries have greatly contributed to the development of bilateral relations.

The importance of roadmaps for the development of cooperation between the two countries in various areas was noted, and in this respect, hope was expressed that the new roadmap in the field of innovation, proposed during the official visit of the First Vice President of the Republic of Azerbaijan Mehriban Aliyeva to the Russian Federation in November last year, would be soon approved.

Support for the full commissioning of the North-South transport corridor, which is of special importance for the development of trade and economic relations and strengthening regional cooperation was expressed. It was also noted that the commissioning of a new border bridge over the Samur River will give a new impetus to mutual trade and people-to-people contacts.

The sides then exchanged views on cooperation and reciprocal support within international organizations. The parties agreed to strengthen cooperation within the United Nations (UN), the Organization for Security and Cooperation in Europe (OSCE), the Commonwealth of Independent States (CIS) and the Shanghai Cooperation Organization (SCO). It was noted with satisfaction that Russia supported the initiative of the President of the Republic of Azerbaijan to convene a special session of the UN General Assembly on the fight against the COVID-19 pandemic.

The Ministers exchanged views on the settlement of the Armenia-Azerbaijan Nagorno-Karabakh conflict. Touching upon the recent military provocation committed by the Armenian armed forces in the direction of Tovuz district of the Azerbaijan-Armenia border, Minister Jeyhun Bayramov noted that this incident, as well as statements by the Armenian leadership aiming to escalate tensions in the region, hampers the settlement of the conflict through negotiations. The importance of holding substantive talks in accordance with the demands of UN Security Council resolutions on resolving the conflict was stressed. In his turn, Russian Foreign Minister Sergey Lavrov stressed the importance of continuing negotiations for the settlement of the conflict.

Touching upon the current global situation, the Ministers stressed the importance of international cooperation in combating the pandemic. Minister Jeyhun Bayramov noted with satisfaction the assistance provided by Russia, including the deployment of Russian specialists to Azerbaijan.

At the meeting, discussions were also held on other issues of mutual interest.