The desecration of Azerbaijani historical buildings and cemeteries is indicative of Armenian hatred - British Journalist
Read: 461

Activities on provision of peacekeeping contingent of Russia are being held - Azerbaijan`s Defense Ministry - PHOTOS
Read: 269

Design work has begun on the construction of another highway in the territories liberated from the occupation
Read: 267

"I am very glad to announce that, Lachin region has been liberated from occupation." - Azerbaijani President
Read: 203

Western stance on Belarusian election was prepared in advance - Putin 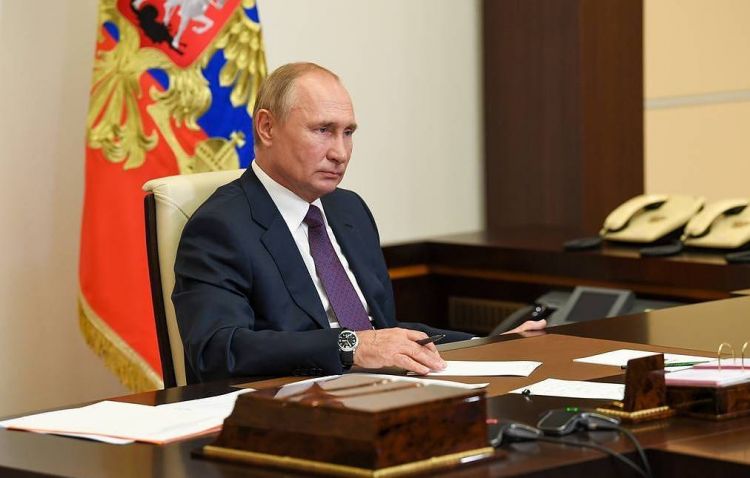 The refusal of the representatives of the OSCE Office for Democratic Institutions and Human Rights (ODIHR) to observe the election in Belarus gives grounds to suspect that the position of the West regarding this process was prepared in advance, said Russian President Vladimir Putin.

According to Tass News, Vladimir Putin touched upon the situation in Belarus in an interview with Sergey Brilev on the Russia-1 TV channel aired on Saturday.

"Belarusian authorities have invited the OSCE ODIHR to participate in the monitoring of the election. Why didn’t they come? This immediately makes us think that, basically, the position on the results of this election has already been prepared," he said.

In the Russian leader’s opinion, some people may be doubtful about the results of the Belarusian election, although "there is nothing ideal in the world, nor in politics, nor in economy, nor in the social sphere." "Even in nature nothing is ideal, even though it is the most perfect realm created by God," he added. "I have all grounds to doubt the absolute honesty of the doubtful," the Russian leader stated.

That said, Putin has clearly stated the position of the Russian side. "We go on a premise that the election occurred. I did this at once, we recognized its legitimacy and, as you know, I congratulated Alexander Grigorievich Lukashenko on his victory in this election. That’s it," the leader of Russian state concluded.

The presidential election in Belarus was held on August 9. According to the final results of the Central Election Committee, incumbent president of Belarus Alexander Lukashenko got 80.1% of the vote. Svetlana Tikhanovskaya who was considered his main opponent, was second with 10.12%, she refused to recognize the election results. Soon after she left for the neighboring Lithuania and initiated the creation of the Coordination Council with the goal to conduct a new election. Mass protest rallies of those disagreeing with the election results continue in the country for almost three weeks. In the early days these rallies were accompanied by clashes between protesters and law enforcement forces.