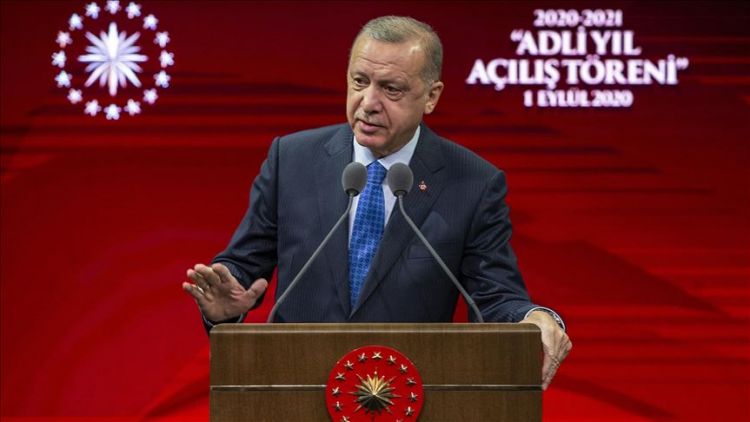 Turkey’s activities in the Aegean and Eastern Mediterranean are based on its search for rights and justice, the nation’s president said on Tuesday, Anadolu Agency reports.

Speaking at the ceremony launching 2020-2021 judicial year at the presidential complex, Recep Tayyip Erdogan said some countries have sought to confine Turkey to its shores, calling it “a blatant injustice”.

“It is the most explicit evidence of wrongdoing and injustice to attempt to confine Turkey -- disregarding its gigantic size of 780,000 square kilometers -- to its shores through an islet of 10 square kilometers,” he said, referring to the tiny island of Meis.

According to recent media reports, the Greek authorities deployed military elements to the island of Meis. Turkey slammed the move, recalling that the island has had a demilitarized status since the 1947 Paris Peace Treaties.

“If true, these media reports are a novel manifestation of the law-disrespecting actions of Greece and her true intentions regarding the Eastern Mediterranean,” Foreign Ministry spokesman Hami Aksoy had said, adding Turkey rejects the “illegitimate attempts of changes on the status of the island.”

Keeping armed forces on the eastern Aegean islands is a violation of the Lausanne Peace Treaty of 1923 and the Paris Treaty of 1947, Turkish authorities assert.

Dubbing fait-accompli attempts in Mediterranean “modern colonialism,” Erdogan said all neighboring countries in the region have rights to benefit from resources.

“The effort of illegally laying claim on the resources of the Mediterranean, which all surrounding countries have rights to, is a clear example of modern colonialism. It is also the biggest injustice that some try to realize their hidden agendas by throwing a state, which has maintained its existence by hiding behind others throughout history, before Turkey,” said the president.

Referring to the hidden political designs in the region as “shadow plays,” Erdogan said Turkey is “fed up with” hidden agendas and it is “getting ridiculous to throw a country not able to do good for its own as bait before Turkey, a regional and global power.”

In July, after Athens objected to Ankara's seismic survey in an area south of the island of Meis, or Kastellorizo, German diplomatic efforts helped defuse tensions between Turkey and Greece.

But Greece's controversial move to sign a maritime delimitation agreement with Egypt, which Turkey says violates its continental shelf and maritime rights, has further sparked tensions between the two neighbors.