There can be no military solution in Libya - Turkish Vice President | Eurasia Diary - ednews.net

The desecration of Azerbaijani historical buildings and cemeteries is indicative of Armenian hatred - British Journalist
Read: 455

Activities on provision of peacekeeping contingent of Russia are being held - Azerbaijan`s Defense Ministry - PHOTOS
Read: 265

Design work has begun on the construction of another highway in the territories liberated from the occupation
Read: 263

"I am very glad to announce that, Lachin region has been liberated from occupation." - Azerbaijani President
Read: 198

There can be no military solution in Libya - Turkish Vice President 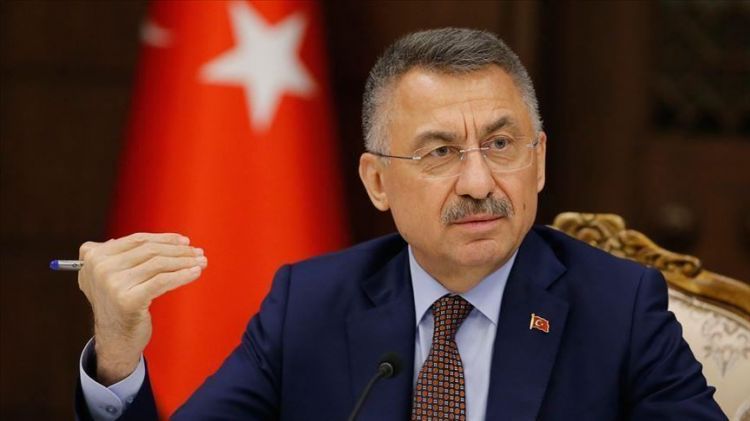 Turkish Vice President Fuat Oktay made speech on the international affairs in webinar with the Foundation for Political, Economic and Social Research (SETA) think-thank in Washington, Anadolu Agency reports.
He touched upon significant issues on the geopolitical developments in the Eastern Mediterranean, Africa and the Middle East as well as the diplomatic relations of Turkey with the United States.
Fuat Oktay, first talked about the current situation in the Eastern Mediterranean.
He noted that Greece cannon question Turkey, which has the longest coastline in the region, and saying “our continental shelf is "4,000 times bigger" than the island”.
Oktay warned that the militarization by Greece on the islands of Meis and Kastellorizo is unacceptable.
“The island was supposed to be demilitarized based on agreements because it is so close to Turkey but is now militarized. That is directly concern of Turkey," said Oktay.
He added that Greece's controversial move to sign a maritime delimitation agreement with Egypt violates the continental shelf and maritime rights of Turkey, which has sparked the tensions between two neighbouring states.
Touching upon Libyan issue, Turkish Vice President said that the maritime agreement between Turkey and Libya is red line in the Eastern Mediterranean.
“There can be no military solution in Libya. Turkey has been load and clear from the onset of conflict,” he stressed.
He said that  Aguila Saleh, the pro-Haftar head of the Tobruk-based parliament, and the UN-recognized Government of National Accord (GNA) is trying to negotiate but warlord Khalifa Haftar has already ruled out talks.
“While the GNA seeks a solution in Jufra and Sirte, eastern groups are trying to take Jufra out of the equation, which is "critical" for the GNA to have a "sustainable solution" to the conflict,” he underscored.
Fuat Oktay also expressed the significance of Lebanon for Turkey.
"The colossal explosions in Beirut last month were devastating and require urgent international attention. We are committed to increasing our humanitarian assistance to this country to heal its wounds. Tomorrow another ship, full of humanitarian aid, will be leaving from Turkey for Lebanon," Oktay said.
"A stable Lebanon is a must for the stability in the Middle East," he added.
Vice-President, in the end, paid attention on the relationship and cooperation with the United States. He said that the challenges in the relationship between Turkey and the US challenges are more asymmetric, unpredictable and multi-faceted than ever.
"This is why the deteriorating bilateral defense cooperation environment is of great concern," he said.
Turkey’s purchase of Russia’s S-400 missile systems has entailed the deterioration in the bilateral diplomatic relations between two countries.
"In the face of clear and present ballistic threats, emanating from our immediate neighbourhood, Turkey made the sovereign decision to procure S-400 systems in the unfortunate absence of other alternatives from our allies including the U.S." vice president reiterated.
According to him, the impasse is also the direct result of the failure of certain political circles in Washington to grasp the full extent of our strategic alliance. He accused US Congress members of pursuing "deliberate efforts to damage bilateral relations between two countries by prioritizing their personal political interests.
"This behaviour manifests itself in the unfounded calls for sanctions against Turkey, as well as in blocking deals which are bound to improve the Turkish-US defence cooperation," he said.