"The beauty of Karabakh is felt when it is united with Azerbaijan" - Umud Mirzayev - VIDEO
Read: 248 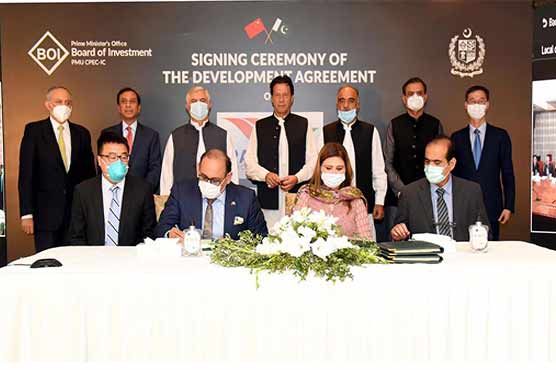 Pakistan and China on Monday signed an agreement for the development of the Rashakai Special Economic Zone (SEZ) under the China Pakistan Economic Corridor (CPEC), EDNews reports citing Dispatch News

The Signing Ceremony of the Development Agreement for Rashakai Special Economic Zone was held at the Prime Minister’s Office in Islamabad.

The China Road and Bridge Construction Company is the development partner with the Khyber Pakhtunkhwa government for the Rashakai SEZ project.

In a statement, the Prime Minister’s Adviser for Commerce and Investment Abdul Razak Dawood said that this agreement will be a landmark in the Industrial Cooperation under the second phase of CPEC.

The adviser said that the development of Rashakai will revitalize the economic activity creating a lot of jobs in the construction sector for the local population.

Abdul Razak Dawood said that the SEZ will have a far-reaching socio-economic impact in the region by attracting more investment, spurring industrialization, creating employment in the industry and ensuring export led-growth.

The prime minister’s adviser also congratulated all the stakeholders, particularly the Khyber Pakhtunkhwa government and the Board of Investment (BOI) for their efforts in the materialization of the project.