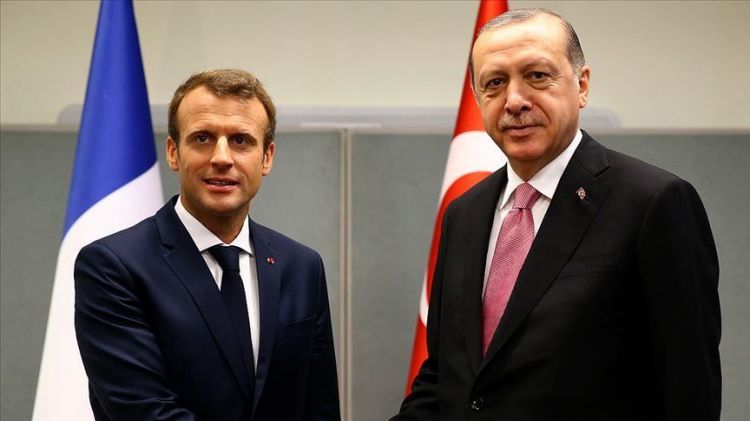 The Turkish and French presidents had a phone conversation Tuesday and discussed the Eastern Mediterranean, bilateral ties and relations between Ankara and the European Union, Anadolu Agency reports.

Erdogan stressed that ignoring the legitimate rights of Turkey and the Turkish Cypriots in the Eastern Mediterranean is the reason for the tensions in the region.

He also noted that diplomatic opportunities should be utilized and sustainable negotiation processes implemented to reduce the tensions, the statement added.

Ankara "wants to discuss and solve all problems on the table," he said.

According to the statement, Erdogan expects a "constructive" attitude from Paris and favors consultation and communications between Turkey and France for the sake of a regular mechanism.

He added that it is important to see "constructive dialogue and cooperation" at next week’s EU Leaders Summit for possible solutions to regional issues.

The meeting, originally set for this week, was postponed to Oct. 1-2 due to a coronavirus infection close to an EU official.

According to a statement issued by the Elysee Palace, Macron said his country was always ready for dialogue and attached importance to a solid relationship between the EU and Turkey.

The issues of Libya and Syria along with the Eastern Mediterranean were discussed in the conversation, which lasted more than an hour, it said.

The statement also underlined that Macron hailed the exploratory talks to begin soon between Turkey and Greece.

Macron stressed that he wanted the talks to be held in good faith and with the concern of lowering the pressure in the region, the statement said, adding the French leader also called for a similar dialogue to be conducted between Turkey and the Greek Cypriot Administration.

It was stated that the two leaders decided to continue the dialogue on these issues at the presidential and ministerial levels.