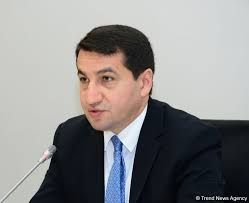 The Azerbaijani lands will be liberated from the occupation, the Aide to the Azerbaijani President and the head of the Foreign Policy Department of the Presidential Administration Hikmat Hajiyev said, Eurasia Diary reports citing Trend News Agency.

“After Barda district, we will go to Tartar district, if the Armenians want to shoot, let them shoot,” assistant to the president said.

“The Armenian Armed Forces cowardly flee from the battlefield,” assistant to the president said. “If they are real men, then let them go to the battlefield."

Armenian Armed Forces launched a large-scale military attack on positions of the Azerbaijani army on the front line, using large-caliber weapons, mortars, and artillery on Sept. 27. Azerbaijan responded with a counter-offensive along the entire front. Currently, Azerbaijan continues the liberation of its territories from Armenian troops.

The conflict between the two South Caucasus countries began in 1988 when Armenia made territorial claims against Azerbaijan. As a result of the ensuing war, the Armenian Armed Forces occupied 20 percent of Azerbaijan, including the Nagorno-Karabakh region and seven surrounding districts.