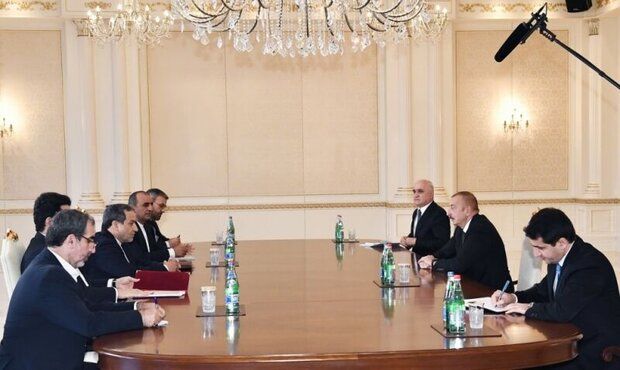 During the meeting which was held in Baku late on Wednesday, Araghchi delivered Iran’s proposed initiative to resolve the Nagorno-Karabakh conflict.

Aliyev pointed to month-long military conflict between his country and Armenia, saying that Azerbaijan will liberate its lands from occupiers and establish the standards of international law and justice there.

Referring to the two-day missile attack by Armenian forces on the city of Barda in the Azerbaijan Republic, Aliyev said that 21 civilians were killed and more than 70 wounded in today's (Wednesday) attack.

Araghchi, for his part, said that Iran has always opposed the occupation of the territories of the Azerbaijan Republic and has supported the territorial integrity of this country.

After the meeting, Araghchi described his consultation with the Aliyev as positive, constructive and said, "Today, in a long positive and constructive meeting, I presented the regional plan of Iran to help end the conflict in Nagorno-Karabakh to the President of the Republic of Azerbaijan.

Arriving in Baku, the capital of the Republic of Azerbaijan, on Tuesday night, Abbas Araqchi stated that Tehran is trying to establish peace in the region, referring to the initiative of the Islamic Republic of Iran to resolve the Nagorno-Karabakh conflict.

Araqchi said that his visit to Baku is part of a periodic visit to those countries in the region that are influential in ending the recent conflicts between the Republic of Azerbaijan and Armenia.