Ter-Petrosyan offered me to surrender Karabakh in 2018 | Eurasia Diary - ednews.net

Ter-Petrosyan offered me to surrender Karabakh in 2018 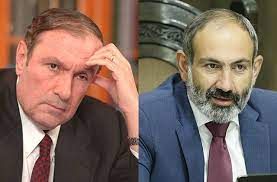 Armenian Prime Minister Nikol Pashinyan said at a parliamentary session on Wednesday that the first President, Levon Ter-Petrosyan, offered him to surrender lands in Karabakh in the summer of 2018, Eurasia Diary reports citing Sputnik Armenia.
'I will reveal a secret what the first President, Ter-Petrosyan told me during our meeting in July 2018. I quote: "You should already give the lands away." In exchange for what? Why? How? The idea of ​​the first president, at least formed in that day, did not go beyond this framework, everything else is a matter of assessment,' said Pashinyan.
Ter-Petrosyan said earlier that it is in the interests of the state for Pashinyan to immediately resign with legal guarantees of his immunity and, possibly, temporary exile. According to the ex-president, the current prime minister 'is guided not by concern for strengthening the state, but by an undisguised obsession with maintaining power at any cost.'