Rovnag Abdullayev discusses with the President of Turkmenistan the joint development of the Dostlug field
Read: 189

Death toll rises to 67 from Israeli attacks against Palestin
Read: 185 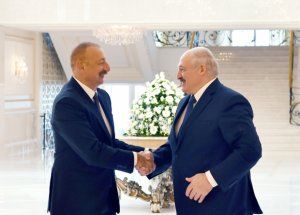 'In the near future we will see active development of interaction between Azerbaijan and Belarus in all directions,' 'SB. Belarus today' newspaper quotes Andrei Savinykh, Chairman of the Permanent Commission on International Affairs of the House of Representatives of Belarus, as saying while speaking about the recent visit of the President of Belarus to Azerbaijan, Eurasia Diary reports citing Azeri Daily.

'The visit of the President of Belarus to Baku, in my opinion, will become one of the most productive visits at the highest level in recent years. I am sure that in the near future we will see an active development of interaction in all areas, including in the field of industrial cooperation, science and education. Joint activities in the field of electric transport development will be added to the already established areas of our partnership,' he said.

Savinykh drew attention to three more new aspects that were voiced during the negotiations.

'First, Azerbaijan invites the Belarusian side to participate in programmes for the restoration of Karabakh. Moreover, this will be done on the basis of the unique Belarusian experience in the creation of agro-industrial complexes, which have proven themselves well in our country and abroad.

The second element is the efforts of Belarus to attract Azerbaijan to closer cooperation with the Eurasian Economic Union. Undoubtedly, in the coming months, we will see a closer work of Azerbaijan at the sites of the EAEU and the Customs Union.

Finally, it is important to note the proposal made by the President of Azerbaijan on the possible participation of Belarus in the settlement of differences and strengthening of interaction between Azerbaijan and Armenia. This is an important new element. Belarus, as a country with a peaceful foreign policy, which builds its relations with partners on the principles of good-neighbourliness and mutual understanding, can indeed make a significant contribution to the development of contacts between Azerbaijan and Armenia, which will ultimately become the basis of lasting peace in the South Caucasus,' said Savinykh.