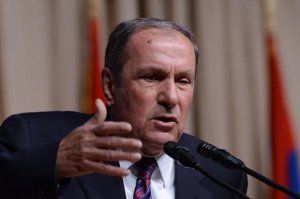 Let us remind you that earlier the Prime Minister of Armenia Nikol Pashinyan said in the parliament that the first President Levon Ter-Petrosyan during their meeting in July 2018 in the context of the Karabakh settlement had said: 'You must surrender the land already.'

'I have to state with regret that the leader of Armenia is a liar, because this was not the case. At the same time, Nikol Pashinyan speaks about this very categorically. This is an absolute lie, it does not correspond to reality, this was not the case,' Zurabyan said regarding Pashinyan's statement.

According to him, this ability of the head of the Armenian government to lie actually poses a threat to national security.

Zurabyan called on Pashinyan to provide evidence that Levon Ter-Petrosyan made the statement attributed to him.

'If he says that he is quoting, then he can somehow prove that this was so... But no, this is a lie, this is not true, this did not happen,' Zurabyan noted, calling Pashinyan's behaviour inappropriate for the country's prime minister.