Putin to deliver his annual state of the nation address on Wednesday | Eurasia Diary - ednews.net 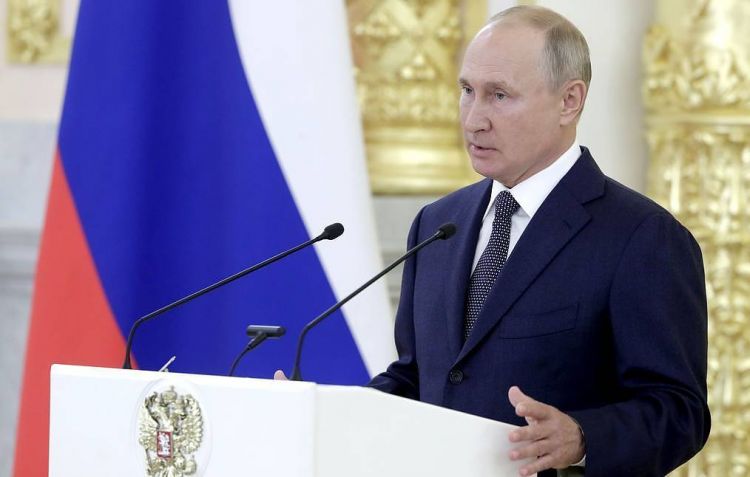 President Vladimir Putin will deliver his annual address to Russia’s bicameral parliament, the Federal Assembly on Wednesday. It will be the 27th state of the nation address in the history of modern Russia.
The Presidential Address to the Federal Assembly of the Russian Federation is president’s annual public speech before both houses of the parliament, which assesses the current state of affairs and outlines the key areas of domestic and foreign policies. In Russia, President Boris Yeltsin first introduced this practice of addressing members of the State Duma (lower house) and the Federation Council (upper house) on February 24, 1994. He delivered six addresses to the parliament in 1991-1999. Russian President Vladimir Putin has addressed the Federal Assembly 16 times (the first - on July 8, 2000), and Dmitry Medvedev - four (the first - on November 5, 2008).
Putin’s previous Address to the Federal Assembly took place on January 15, 2020.
Special format
This year, the format of the event had to be changed due to the novel coronavirus pandemic. Although Vladimir Putin, who has already been vaccinated against COVID-19, opted for personal attendance, Kremlin nevertheless introduced certain coronavirus-related restrictions this year.
As a rule, the ceremony is attended by about 1,000 guests: lawmakers and senators, cabinet members and presidential administration officials, chief judges of the Constitutional and Supreme courts, heads of Russian regions, senior clerics, chairs of the Central Election Commission, the Audit Chamber and the Public Chamber. Last year, the president delivered his address in front of the audience of about 1,300 people. This year, the Kremlin did not disclose the number of those invited to attend.
Journalists were warned about the need to wear masks and observe social distance throughout the entire ceremony. All visitors will have to submit several certificates proving their negative COVID-19 status.
The number of journalists covering the event was noticeably reduced this year: only 435 reporters were accredited, compared to 900 the year before.
Time and venue
The event traditionally begins at noon Moscow time. It will be broadcast live by the Rossiya-1, Rossiya-24 and Channel One.
There are no rules about duration of the event. The longest speech was delivered in 2018 and lasted almost two hours, the shortest ones took place in 2004 and 2005, both lasting 48 minutes. On average, the state of the nation address takes about 75 minutes.
This year, the Manezh Central Exhibition Hall was chosen as a venue.
Traditionally, the Kremlin makes no previews about the contents of the speech. At the same time, Kremlin Spokesman Dmitry Peskov said this year’s address "will be post-COVID in this or that form," and will probably shed light on support measures or ways of tackling the coronavirus-related crisis. According to Peskov, this year’s upcoming parliamentary elections and past protests may also be reflected.
Expectations
Federation Council (upper house) Speaker Valentina Matviyenko expects the address to shape "a new system of coordinates" and become a message of "the new time." "Meanwhile, I’m sure that as always, it will analyze major current tasks, highlight key points and give direct orders," she said.
In her opinion, some provisions of the address may require quick start of implementation as well as the adjustment of legislators’ work plans. Therefore, the Federation Council’s Chamber will convene the following day (on April 22), with plenary session slated for April 23.
In the run-up to the event, the United Russia party announced a series of initiatives to be submitted to Putin, such as support for major regional infrastructure projects and modernization of utility networks.
Russian Communist Party leader Gennady Zyuganov, in turn, said he expected the address to provide a "fair account" of events in the country. Besides, he believes that President Putin should mention the recognition of the self-proclaimed Donetsk and Lugansk People’s Republics in his address to the Federal Assembly.
The leader of the ‘A Just Russia’ party, Sergei Mironov, expects the message to contain a series of drastic social measures. The speech should focus on fighting poverty, he said.