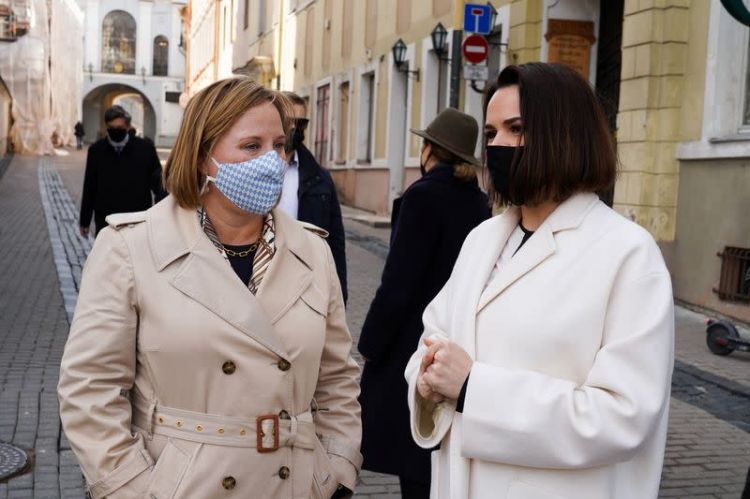 The U.S. ambassador to Belarus met exiled opposition leader Sviatlana Tsikhanouskaya on Wednesday in a show of support on the eve of a planned meeting between President Alexander Lukashenko and his Russian sponsor Vladimir Putin in Moscow.
Russia rallied behind its ally Lukashenko last year when he cracked down on protesters who took to the streets after an election his opponents say was rigged. Lukashenko is due to meet Putin on Thursday in the Kremlin.
Tsikhanouskaya, the opposition candidate in last year’s election, is in self-imposed exile in neighbouring Lithuania, where she regularly receives Western officials.
“It is important that the international community speak up and speak out about what’s happening, that we pay close attention, and that we call for the immediate release of all political prisoners in Belarus,” U.S. ambassador Julie Fisher said on Wednesday after meeting Tsikhanouskaya in Vilnius.
Tsikhanouskaya told reporters she wants to see Belarus “independent, free and creating friendly and mutually beneficial relationships with all countries, first of all with its neighbours, but also others.”
Washington named Fisher its ambassador to Belarus in December, a post vacant since 2008. She has repeatedly met Tsikhanouskaya and other opposition figures but has yet to present credentials in Minsk. She is visiting Lithuania and Poland this week to meet Belarus democracy activists.
Protests against Lukashenko, which brought tens of thousands of people into the streets for months last year, have since dwindled. Thousands of people were arrested and nearly all major opposition figures are in jail or exile.