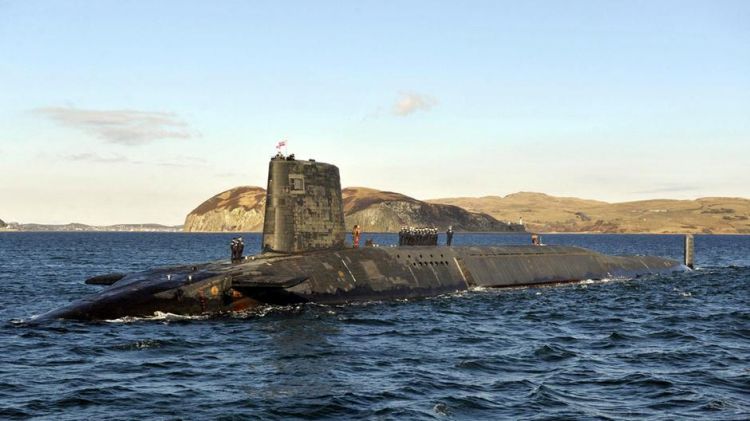 The operational effectiveness of Britain’s nuclear deterrent could be pitched into jeopardy depending on the outcome of this week’s Scottish elections.
If Scottish leader Nicola Sturgeon achieves her goal of winning an outright majority in Thursday’s parliamentary election, this will enable her Scottish National Party to press ahead with its campaign to achieve full independence from the UK. An Optimum poll on Tuesday predicted the party would take 67 of the 129 seats in the voting.
In the event of the SNP’s relentless campaign to break away from Westminster being successful, a fully independent Scotland would inevitably raise questions about the future operations of Britain’s submarine-based nuclear deterrent, which is based at Faslane in western Scotland.
One of the SNP’s key policies is its campaign for a nuclear-free Scotland, and to this end the party is a staunch opponent of the Royal Navy’s Faslane base, 42 kilometres west of Glasgow, since it was established in the 1960s at the height of the Cold War.
Faslane was chosen, because of its geographic position, as the operational base for the Royal Navy’s four Vanguard-class, nuclear-powered submarines, which are equipped with Trident nuclear missiles. The base is on the relatively secluded but deep and easily navigable Gare Loch and Firth of Clyde on the west coast of Scotland.
The four boats use their base on the River Clyde to maintain a continuous at-sea presence for 365 days of the year with the aim of remaining undetected by hostile states, thereby providing the country with a highly effective nuclear deterrent, one that has continued even though the Cold War with the Soviet Union ended more than 30 years ago.
Today, British defence officials argue that Britain needs to maintain its nuclear deterrent to dissuade emerging threats, such as Iran, as much as conventional potential threats, such as Russia, China and North Korea.
Such is the importance of the nuclear deterrence to Britain’s future defence needs, especially now that the Brexit process is complete, that Whitehall has invested billions of pounds building a replacement system for Trident with a new fleet of submarines and updated missiles at an estimated cost of about £40 billion ($55.53bn), which will enable the UK to maintain its nuclear deterrent well beyond the 2060s.

In addition, Boris Johnson’s UK government announced during the completion of the recent Integrated Review of Britain’s future defence requirements an increase to its stockpile of nuclear missiles by 40 per cent from its current level of about 180 missiles to 260.
The decision is controversial, because it flies in the face of Britain’s previous commitment to undertake gradual reductions in its nuclear arsenal. But a significant increase in Trident warheads is deemed necessary by London to increase the effectiveness of the deterrent at a time when Britain and its allies are facing a more challenging and diverse global threat environment.
The prospect, therefore, of Ms Sturgeon’s SNP emerging victorious from Thursday’s poll is one that is being viewed with deep consternation within British defence circles, because it would raise significant doubts about the ability of the Royal Navy to maintain its operations at Faslane.
At the start of the Scottish election campaign this year, the prospect of the SNP achieving an outright majority in Holyrood, the seat of the Scottish Parliament, was considered a genuine possibility.
More recently, Ms Sturgeon has seen her popularity plummet after her very public row with former SNP leader Alex Salmond over his inappropriate behaviour during his term as Scotland’s first minister.

The SNP has 61 members of the Scottish Parliament, just four short of the total required for an overall majority. During the previous two parliaments, the SNP relied on the support of the Scottish Green Party, which is also opposed to the Faslane base, to pass key legislation, such as the annual budget and rules on climate change.
If the SNP were to achieve its goal of winning an overall majority on Thursday, then Ms Sturgeon would be expected to call for a second referendum on Scottish independence – known in Scotland as Indyref2. Having lost the previous referendum for independence in 2014, Ms Sturgeon and her supporters argue that Brexit has changed the political relationship with Westminster, because the majority of Scots voted to remain in the EU.

Mr Johnson insisted that he would not allow a second Scottish referendum, because the previous vote was supposed to be a “once-in-a-generation” event. But Westminster would come under severe pressure to allow a second referendum if Ms Sturgeon did emerge victorious on Thursday, with all the implications that could ultimately have for Britain’s standing as a nuclear power.
The fact that so much is at stake in the Scottish elections would certainly explain why Iran has been accused of trying to influence the outcome by posting fake social media posts in favour of the SNP.
The break-up of the UK, and the disruption of Britain’s nuclear deterrent, would undoubtedly be regarded as a major victory by Tehran in its campaign to expand its global influence.