Dendias and Çavuşoğlu - Getting ready for the second round | Eurasia Diary - ednews.net

Dendias and Çavuşoğlu - Getting ready for the second round 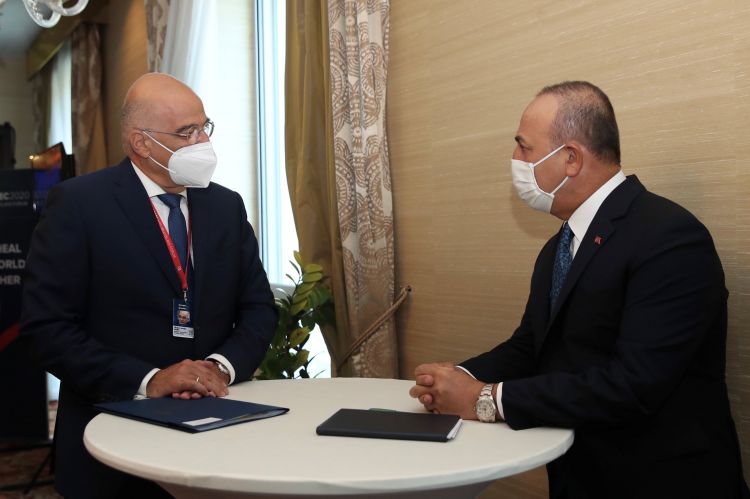 “We wish happy Eid Mubarak to Greek Muslims, as well as to the Muslims all over the world! Peace, happiness and prosperity to all,” Nikos Dendias wrote in his official account in two tweets, one in Greek and one in Arabic.
It is not only the special circumstances of Turkish-Greek relations that have brought the Greek foreign minister very much to the foreground lately. It is his special style of polite friendliness with everybody which makes him approachable, as he seems to answer to everyone who speaks to him, journalists too. I met him during one of his visits to Istanbul, just before the pandemic nightmare, after he was appointed as foreign minister and getting involved in the labyrinth of the Turkish-Greek affairs. He had visited the patriarchate in Phanar, following the victory of his party of New Democracy in the July 2019 elections where he won the highest number of votes in Athens. I knew that he was one of the longest-serving deputies, an eloquent speaker with an impressive background in law studies. I knew also that he headed various ministries under three prime ministers of his center-right party. But what I was curious about was to find out the constituency where he was first elected. So, after obtaining his statements on why he came to Turkey starting his visit as foreign minister of the Kyriakos Mitsotakis government with a visit to Phanar Patriarchate, I asked him whether he originally was a deputy of Corfu. My motive was purely of regionalist nature. My origin is from the same broad region of western Greece where people claim - often an exaggeration - to be more westernized, simply because they joined mainland Greece as late as 1864 after being part of Venice, France, Russia and finally England.
There at the outside paved court of the patriarchate, Dendias spared a minute to confirm to me that he was first elected as a deputy of Corfu. But then, as if he had a second thought, he went on to clarify his statement even further, saying, “Actually, to be truthful, I am not from Corfu, but from the Paxi islands,” which are a couple of miniscule islands in the Ionian Sea, not far from my own island. I sort of liked that answer, as politicians do tend to exaggerate about everything. Interestingly, I later found out that Dendias’s origin goes even further than the “westernized” Ionian Islands, as his family came from Himara of South Albania, where a sizeable Greek minority still lives.
Last April, Dendias became the focus of attention both in Turkey and in Greece. His joint press conference with his “friend” and counterpart Mevlüt Çavuşoğlu, whom he knows from the time they both served as members of the parliamentary assembly of the Council of Europe around mid-2000, was, to say the least, “tempestuous.” It was a war of words before the TV cameras testing the basic rules of diplomacy. Dendias and Çavuşoğlu, each defending their corner, each putting forward their arguments against each other’s country, demonstrating once again how bumpy the dialogue process that has resumed would be. However, for Dendias, his show of resoluteness at the Turkish capital, actually after a “very friendly” meeting with the Turkish president (according to Erdoğan’s own words), earned Dendias a lot of praise in Athens. The public opinion saw in Dendias a proper defender of Greece in “enemy land.” Although, his sudden rise to diplomatic prominence in Greece caused an array of backstage political gossip that he might be a challenge to the Greek prime minister. But all that was quickly swept aside when Dendias assured that whatever he said in Ankara was “after prior agreement with the PM.”
According to the latest information from Athens, the next Dendias-Çavuşoğlu meeting, which is due in the Greek capital, will take place on May 31. Despite everything, it seems that both sides, for their own reasons, want to keep the process of rapprochement alive. For Turkey, the EU is very important, while for Greece, the U.S. is perhaps becoming more important after Biden’s victory.
My prediction - for what it matters - is that the meeting in Athens will not display a second round of the outburst we witnessed in Ankara. It will be a meeting with more diplomatic rhetoric than political anger. Both ministers are very good at that.