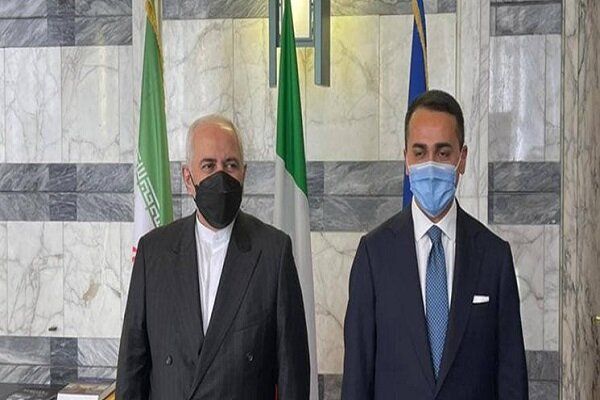 Iranian Foreign Minister Mohammad Javad Zarif met and held talks with his Italian counterpart Luigi Di Maio in Rome on Monday to discuss bilateral relations and issues of mutual concern.
The visiting Iranian Foreign Minister Zarif met and held talks with the Minister of Foreign Affairs and International Cooperation of Italy Luigi Di Maio on Monday to discuss expansion of bilateral relations between the two countries of Iran and Italy.
In addition to holding talks with regards to the expansion of joint cooperation in the area of bilateral ties, Zarif will also exchange views with Italian officials on the issues of mutual concern at the international level.
Earlier, Iranian Foreign Minister Zarif visited Spain on Friday and met and held talks with the foreign and industry ministers of the country.
At the end of his trip to Spanish capital Madrid, Zarif pointed to his meetings with the foreign and industry ministers of Spain and wrote in a tweet, “Constructive and expensive talks were held on the expansion of economic ties as well as other issues in the field Joint Comprehensive Plan of Action (JCPOA), Palestine, Persian Gulf and Afghanistan.”
Elsewhere, Iranian Foreign Minister Zarif expressed hope that new round of economic cooperation would start between Iran and Italy after the termination of the coronavirus global pandemic.