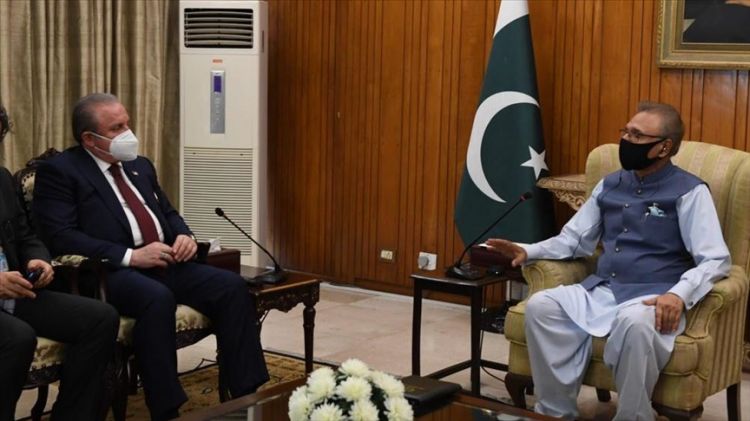 The Pakistani president on Tuesday said his country highly values its ties with Turkey as both the nations enjoy excellent relations, according to an official statement.
Speaking with the visiting Turkish Parliament Speaker Mustafa Sentop at the President’s House in Islamabad, Arif Alvi said relations between Pakistan and Turkey are based on religious and cultural linkages, besides unanimity of views on regional and international issues.
Welcoming the speaker, the president said Pak-Turkey relations have been institutionalized in the form of High-Level Strategic Cooperation Council.
Recalling the visit of Turkish President Recep Tayyip Erdogan to Islamabad in February 2020, Alvi said it was a manifestation of a joint desire to transform bilateral relations into a strategic partnership.
He underscored the need for enhanced political and economic cooperation for the mutual benefits of the two sides.
Expressing his gratitude to Turkey for its steadfast support on Kashmir, the president said the people of Pakistan are highly grateful to the leadership of Turkey for supporting Pakistan’s principled stance on the disputed region at international forums.
He also acknowledged that Turkey has been at the forefront of global efforts to fight the COVID-19 pandemic by providing assistance to countries, including Pakistan.
The Turkish parliament speaker thanked the government of Pakistan for a warm welcome, and conveyed sincere greetings of the leadership and the people of Turkey to the government and people of Pakistan.
Referring to the Turkish president’s address at the UN General Assembly and the joint session of the Pakistani parliament where he raised his voice in support of the Kashmiri people, Sentop said his country would continue to support Pakistan’s stance on Kashmir.