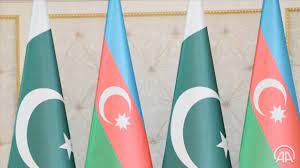 "Pakistani-Azerbaijani relations have deep historical roots," Omar Ayub Khan, Federal Minister for Economic Affairs of the Islamic Republic of Pakistan, said at an official reception at the Azerbaijani Embassy on the occasion of June 15 - National Salvation Day.

He expressed satisfaction with the sincere relations between the two countries and stressed the importance of deepening ties in all areas, especially in the economic and trade spheres.

Omar Ayub Khan was awarded the Jubilee Medal "100th Anniversary of the Diplomatic Service of the Republic of Azerbaijan" in 2019 by the Ministry of Foreign Affairs of Azerbaijan for his services on  the development and strengthening of Azerbaijani-Pakistani relations.