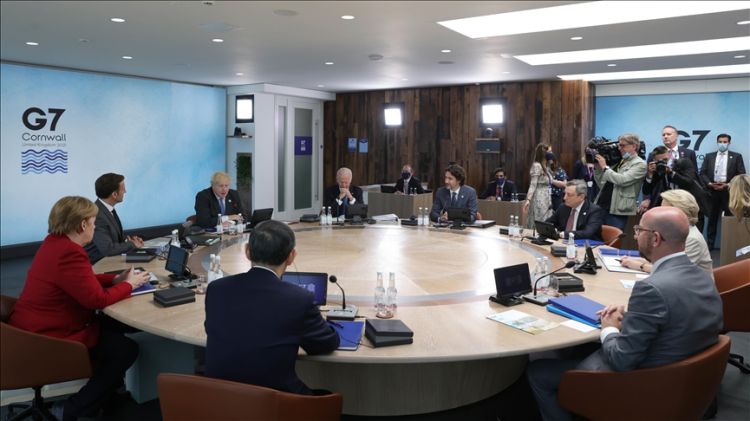 The leaders of the world’s most powerful democracies met in Cornwall, southwest England, for the G7 summit that is being hosted by the UK this year, Eurasia Diary reports citing Anadolu Agency.

It is the first face-to-face G7 summit since 2019, and will last for three days.

The primary issue on the agenda was recovery from the COVID-19 pandemic, with Johnson issuing a call to “learn the lessons” both from the current pandemic and the 2008 financial crisis.

The British prime minister said the G7 now had to allow their economies to recover.

“I think they have the potential to bounce back very strongly and there's all sorts of reasons for being optimistic,” Johnson said.”

“But it is vital we don't repeat the mistake of the last great crisis, the last great economic recession in 2008, when the recovery was not uniform across all parts of society.

“I think what's gone wrong with this pandemic, or what risks being a lasting scar is, I think, that the inequalities may be entrenched.

“We need to make sure that as we recover, we level up across our societies and we build back better.”

He added that the G7 was “united” in its vision for a cleaner and greener world.

The G7 is reported to commit over the summit to supply 1 billion doses of COVID-19 vaccines to poorer countries, with the UK already saying it will provide at least 100 million doses and the US 500 million doses. The aim is to vaccinate the developing world by the end of next year.

The British prime minister will seek to avoid Brexit clouding the conference, especially amid tensions in Northern Ireland.

Biden is a strong supporter of the Good Friday Agreement and is vocal in his pride at his Irish ancestry.

Johnson will meet von der Leyen and Michel on the side-lines of the summit.

The climate crisis is another big topic on the agenda, with the Royal Family playing a key role in the summit too.

Prince Charles, heir to throne, today held a reception for G7 leaders and the heads of some of the world’s biggest companies to discuss public-private cooperation to tackle the climate crisis.

“The fight against this terrible pandemic provides, if ever one was needed, a crystal clear example of the scale and sheer speed at which the global community can tackle crises when we combine political will, with business ingenuity and public mobilisation. And we are doing it for the pandemic. So, if you don't mind me saying so, we must also do it for the planet,” Charles said.

“My sustainable markets initiative has brought together over 300 global CEOs forming a coalition of the willing. They have over $60 trillion in assets under management, and crucially a determination to direct tens of trillions of dollars towards sustainable investment by 2030 with invaluable support from the world's four largest accountancy firms,” the prince added.

Queen Elizabeth II also hosted Biden, Johnson, and the other leaders and their partners for dinner in Cornwall at the Eden Project, an eco-visitor attraction.

Biden previously met the Queen In 1982, when he was around 40-years-old and a senator. The Queen would have been around 56-years-old then when they last met 39 years ago.

Biden is the 13th president Queen Elizabeth has met.

On Sunday, the last day of the summit, Sir David Attenborough, the world-famous broadcaster and natural historian, will address the G7 leaders in a pre-recorded speech.