Shusha Declaration as an important factor in Regional balance of power 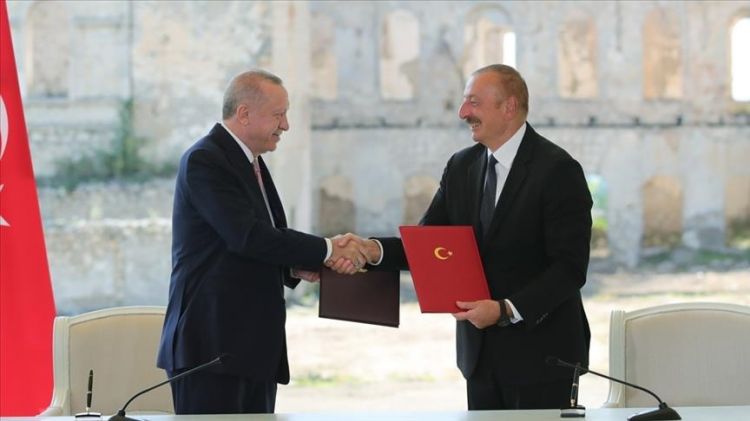 The visit of the President of Turkey Recep Tayyip Erdogan to Azerbaijan on June 15, 2021 and his meeting in the city of Shusha, which was released after 28 years of occupation had a great historical importance and became another grandmaster progress of President Ilham Aliyev. With this visit, the relations of Turkey and Azerbaijan, personifying "one nation - two states" entered into a new stage. The signing of the Shusha Declaration on Allied Relations between the Republic of Azerbaijan and the Republic of Turkey has strategic importance for both countries.

President Ilham Aliyev said that the Shusa Declaration raised attitudes to the highest level: "The name of the declaration is a declaration of allied, and this name speaks alone. Today we have established a qualitatively new relationship, and all the provisions of this declaration are the guarantor of our further cooperation. The signed declaration is based on history. The declarations reflect the words of the great leaders of our peoples Mustafa Kemal Ataturk and Heydar Aliyev. At the beginning of the 20th century, Mustafa Kemal Ataturk said: "The joy of Azerbaijan is our joy, his sadness is our sadness." At the end of the twentieth century, Heydar Aliyev said: "Turkey and Azerbaijan are one nation, two states." These historical words are the main factor of our activity. We are committed to this covenant and demonstrate our commitment to our ancestors and send future generations by signing the Declaration on Allied in Shusha, released in the 21st century. "

One of the key points is the expression of commitment to the Kars Agreement. This is the most strategic part of the declaration. With the signing of the Kars Peace Treaty in 1921, Turkey was responsible for the safety of Nakhchivan. The Shusha Declaration of 2021 provides that in the event of any threat of violations of a recognized UN, the territorial integrity of Azerbaijan guarantees its provision. It was stated that in the future, if there will be threat to the territorial integrity of Azerbaijan, recognized at the UN level, Turkey obliged to intervene  by military means.

The opening of the Consulate General of Turkey in Shusha is another security guarantee. This is one of the main items of serious warning to Armenian separatism and its supporters.

The signing of the Shusha Declaration is a historical achievement. In his speech in Shusha R.T. Erdogan stated that new opportunities for cooperation appeared between all parties: "Armenia should effectively use the opportunity to jointly build a common future."

Recalling the platform of cooperation "3 + 3", which he suggested earlier, President Erdogan said that Russia, Turkey, Azerbaijan, Armenia, Georgia and Iran will participate in this platform: "Together with this platform, we want the region to live in peace and stability.”