Kremlin announces the issues to be discussed at the meeting of the leaders of Russia, Azerbaijan and Armenia in Sochi
Read: 265

Commander-in-chief of the Armed Forces - Winner 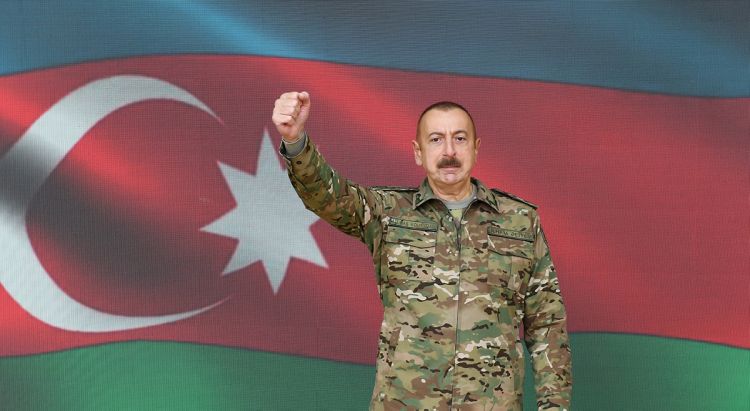 One of the main reasons for the defeat of Azerbaijan in the First Karabakh war was the lack of a strong, volitional leader with experience of international relations capable of heading the army based on the strength of the people. Usually, when the nation and countries are tested, God sends them the Savior. National leader Heydar Aliyev saved Azerbaijan from the flaming civil war, separatism, the threat of decay as state and disappearances from the world map.

Heydar Aliyev achieved a cease-fire. Achieving the cease-fire regime that time meant the creation of a regular army, the development of the country's economy, strengthening public administration and national consent. In a short period of time, the national leader of Azerbaijan managed to create a very reliable guarantee of successful performance of these tasks. Thanks to their wise and suspended foreign policy, the attitude of the great powers and international centers of force to our country began to change. Another important historical merit of Heydar Aliyev was upbringing in the face of Ilham Aliyev of a political successor, capable of successfully manage the country after him.

In his appeal to the people of Azerbaijan on October 1, 2003, the national leader with great confidence wrote about the abilities of his political successor: "He is very smart, pragmatic, well understands modern world politics and economics. ..- a person who knows, energetic and enterprising. I assure you as Ilham Aliyev, and the YENI  Azerbaijan Party will be closely united around themselves the most worthy sons of our people and will do a lot for the development of the Azerbaijani state and well-being of our people. I believe that with your help and support Ilham Aliyev will be able to complete those fateful questions, plans and works that I did not have time to complete. I believe in it as much as in my senses, and impose great hopes for his future. "

It is enough to see the realities of today's Azerbaijan to make sure that these words were written as wisely and farsighted.

Thanks to suspended internal and foreign policy, conducted under the leadership of President Ilham Aliyev over the past years, Azerbaijan has achieved serious success. Numerous economic, social and cultural projects have been successfully implemented. Azerbaijan became the initiator, an active participant and the owner of the most important transport and energy arteries of Eurasia. It is no secret that in recent years most of the budget of the country goes to military spending. Strengthening the army, equipping it with modern weapons,  providing the country's defense capability at the level of modern requirements, was the basis of its daily activities as commander-in-chief of the armed forces. President Ilham Aliyev and his team worked intensively with all international organizations, leaders of co-chair countries and European institutions on the peaceful settlement of the Karabakh conflict. Directly represented by His president, Azerbaijan was so actively and effectively worked on the diplomatic direction that the Armenian side was forced to go to inadequate steps.

Azerbaijan finished  first Karabakh war as  defeated. For the leader of a defeated country, definitely, it was not easy to defend the interests of their country to the end in negotiations on the peaceful solution to the problem. But Mr. President managed to cope with this difficult task. The recent statements of the Armenian leaders, including former Presidents Ter-Petrosyan, Kocharian, Sargsyan and the current Prime Minister Pashinyan clearly showed that the President of Azerbaijan in recent years has insisted on the liberation of all occupied territories.

The need to put an end to the status quo

The speech and statements of President Ilham Aliyev over the past two or three years have also shown that the efforts of the Armenian side to preserve the status quo have already exhausted his patience. Therefore, in his speeches and statements, Mr. President increasingly mentioned a military solution to solve the problem.

The non-constructive position of Armenia and the inaction of the co-chairs made an option of a military solution of the problem more and more relevant. Unfortunately, the leadership of Armenia did not fully realize the seriousness and determination of Azerbaijan. "Karabakh is Armenia, that's the point," said the Prime Minister of Armenia Pashinyan, "going on" than his predecessors. Hope to the political settlement burst as a soap bubble. Soon, the President of Azerbaijan at the prestigious Valdai summit gave a clear answer to the Prime Minister of Armenia: "Karabakh is Azerbaijan - an exclamation mark!". The Supreme Commander Ilham Aliyev decisively declared: "If the Karabakh conflict is not resolved by a peaceful way, military actions will be inevitable. We will never give our lands to anyone. "

No one doubted that War would be. Attempting to the Armenian side to break our state borders in the direction of the Tovus and the departure of sabotage groups into the territory of Azerbaijan, the foundation of the war. These events have shown that the enemy has not yet relieved the necessary lessons from the April fighting of 2016. On September 27, 2020, Armenian armed forces once again tried to cross the line of contact in several directions. Thus, the possibilities of a peaceful solution to the problem were completely exhausted. This meant the beginning of the second Karabakh war, in other words, the operation for the coercion of the aggressor to the world. It was a turning point in the history of Azerbaijan.

The counter offensive of the Azerbaijani army, which began early in the morning of September 27, shocked the enemy. The myths about the "invincibility of the Armenian Army" and "Unreparency of the wall of Ohanyan" were refuted. The Azerbaijani army occurred every hour and every day, freeing our new territories from the occupation. One after another was liberated of the cities of Jabrael, Zangilan, Fizuli, Gubadli, and the Azerbaijani-Iranian state border came  to our full control. Madagiz and Murov operations opened the road to Kelbajar, and, finally, on November 8 in our ancient Shusha, the pearl of the Caucasus, the Azerbaijani flag was raised. The capture of Shusha forced the Armenian army to sign an act of surrender.

A joint statement signed by the leaders of Russia, Azerbaijan and Armenia on November 10, 2020 laid an end to combat actions. According to the agreement, Agdam, Kelbajar and Lachin  districts were liberated from the occupation without a single shot, as President Ilham Aliyev repeatedly stated in his appeals and statements, according to a predetermined schedule.

Thus, Azerbaijan who lost part of its lands over the past 200 years finally fully restored its territorial integrity. The performer of this historic victory was the brave Azerbaijani army, and its chief architect and the guarantor - the Supreme Commander-in-Chief Ilham Aliyev.

President Ilham Aliyev is one of the few pragmatic politicians of the modern world, able to make rational calculations. It has been repeatedly proven that no one, besides himself, does not know what step he will do and when. Ilham Aliyev is a unique politician, a real statesman who can surprise others. His plans no one can predict besides him.

Thus, at the table of the negotiations were those who were forced to admit that they were opposed by a politician with iron logic, steel will and incomparable scientific potential. Along with determination, courage and fearlessness of the Azerbaijani soldier, the determination of the Commander-in-Chief Ilham Aliyev broke the enemy. The powers of the world immediately activated. But they also had to stop, because before them was the Azerbaijani army headed by the decisive  Commander-in-Chief. Each speech and every word of President I.Aliyev became the slogan in the language of our army, our soldiers, raised the morale. The soldier saw and felt that a volitional commander stands at the head of the army. He knew that the Supreme Commander was always with him, and he walked forward, knowing how his iron fist was terrible for the enemy. The atmosphere of real national consent and unity reigned in the country

The second Karabakh war, which began on September 27 and entered our history as a domestic war, ended on November 10, a joint statement signed by the leaders of Azerbaijan, Russia and Armenia. This statement was actually a military surrender of Armenia. Thus, the Azerbaijani army, who wrote one of the most glorious pages of world military history, broke the Military Machine of the enemy and forced him to sign an act of surrender. Not only the Armenian army, but also Armenian mythology, for many years poisoned the brains of the Armenian people was destroyed.

The 44-day war returned to us lost 30 years ago, the lost Karabakh was returned to us once and forever. During the 44th day war, we witnessed the intensive work of a professional cohesive team, a high level of management, impeccable government agencies, unshakable unity and determination of Azerbaijani citizens. Regardless of religion and nationality, we made sure that the external policy is correct, honest and impeccable.

In this 44th day war, we saw how unfair some European states who put the mask of "democracy" and "justice". The 44-day domestic war once again confirmed that the Azerbaijani people are ready to sacrifice their life for their homeland.

Almost every day of the 44-day war, people have repeatedly become witnesses, sadness, joy and even disappointing their president. Hundreds of thousands of people sitting in front of the TV could not keep the tears of joy every time the Supreme Commander announced the liberation of Jabrail, Zangilan, Fizuli and Gubadli. When people heard the news of the liberation of Shusha, they were in the seventh heaven from happiness.

On the day of liberation, Shusha Mr. President visited the avenue of Honor, the grave of the national leader Heydar Aliyev, visited the Martyrs’ Alley and addressed to the people. He said that he is  proud of  the fact that he had fulfilled his father’s  will  and his duty before the memory of Martyrs..

President Ilham Aliyev, together with brave Azerbaijani soldiers and officers, was able to enter his name in the history of Patriotic War as a winner and the liberator of Karabakh.