The first round was a disappointment for the parties of President Emmanuel Macron and his 2017 contender Marine Le Pen as they lagged behind the center-right Republicans. 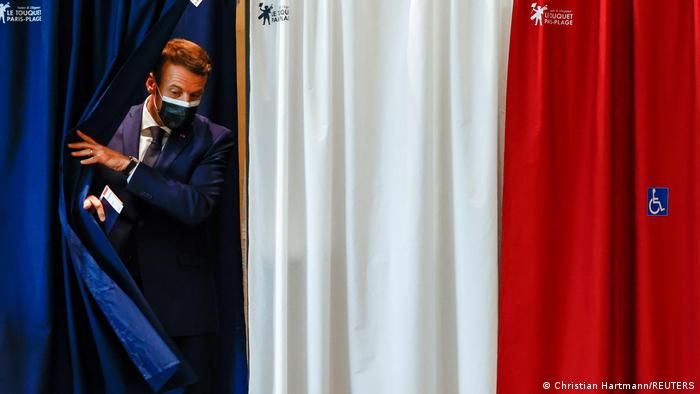 French voters head to polls on Sunday for a regional election runoff after record-low turnout in the first round.
Observers are watching closely as the regional vote could shift the balance between political heavyweights vying for a position in the 2022 presidential race.
But last week's polls prompted cross-party concern over low turnout, with less than 34% of voters.
France is holding the runoff vote as the first round did not see any parties win over 50%. Only parties that garnered 10% of ballots advanced to that crucial second vote.
The final outcome would decide the assemblies for mainland France's 13 regions and 96 departments.
How was the first round?
Last Sunday, the first round saw a defeat for President Emmanuel Macron's ruling party, the Republic on the Move (LREM), which is on course to win none of the 13 regions. It was also disappointing for far-right leader Marine Le Pen.
Although several LREM ministers campaigned, the party did not gain the required 10% in some regions to make the runoffs.
Macron himself embarked on a nationwide tour  that saw him slapped by an onlooker at one point.
Earlier opinion polls had projected Le Pen's party would come first in some regions, but it only came top in one —  the southeastern region of Provence-Alpes-Cote d'Azur.
After being decimated by Macron in the 2017 presidential and legislative elections, the traditional center-right conservatives, the Republicans, staged a surprise comeback in the first round.
The Republicans, who currently run seven of France's most populous regions, won the most overall votes.
The Socialists were also expected to pick up some regions as they are backed by the far-left France Unbowed party.
Who could be a presidential challenger?
Xavier Bertrand, a former health minister from the northern Hauts-de-France region, has emerged as the conservatives' favorite in opinion polls to become the party's face in the presidential election.
Macron's aides see Bertrand as a threat to the president's center-right voter base.
Two conservatives, Valerie Pecresse in the greater Paris region and Laurent Wauquiez in the greater Lyon area, could challenge Bertrand if they win Sunday's elections.