The post-conflict period is also full of enormous challenges, and we are dealing with this skilfully | Eurasia Diary - ednews.net

The post-conflict period is also full of enormous challenges, and we are dealing with this skilfully 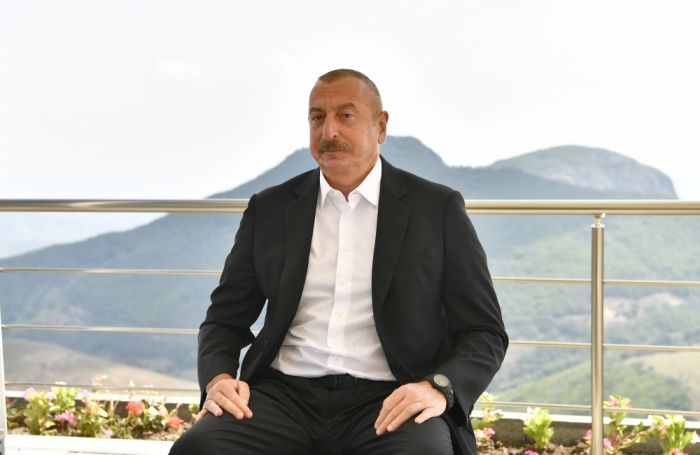 'We have achieved and are still achieving what we want both in the war and in the post-conflict period. I should also point out that I have a very clear idea of ​​the steps that we took before the war, during the war and the future steps after the war. And I know what we should do, when we should do it, how we should do it,' Azerbaijani President Ilham Aliyev said in an interview with Azerbaijan State Television.

'As in all areas, this area also has a conceptual approach. Short-term, medium-term and long-term goals have been defined. Of course, not all of these goals have been announced, because it is too early. But we know what we want and what we want right now, what we can achieve and how we can achieve it. We are taking all our steps accordingly, and I can say that these 8 months are going according to our scenario.

'Because, although the post-conflict period was not as difficult as the war, it was still a very uncertain period. Who could know how the processes would develop. Because during the war period, some countries openly went against us, unreasonably accused us, threatened us with sanctions, tried to bring this issue to the UN Security Council. All this is an integral part of the anti-Azerbaijani scenario, and we have not forgotten about it.

'In the post-conflict period, we acted promptly, showed activity, forced them to accept our agenda, and now we are working on the basis of this agenda. We forced to accept our agenda both in the territories controlled by the Russian peacekeeping forces and around them. Both in the political plane and on the Armenian-Azerbaijani border. And not a single step was accidental.

'Each step was taken according to a well-thought-out program. During the war, I thought about the post-conflict period, about the steps that we will take. I was completely confident that we would win. I was completely sure and said that no one can stop us, no force can stop us. But the post-conflict period is also full of enormous challenges, and we are dealing with this skilfully. I can say that to a large extent we are setting the agenda for the post-war period. Of course, subject to constant contact with neighbouring countries and taking into account their concerns...

'We sent an agenda to Armenia - a peace treaty. Let it say it doesn't want it. Let it say that it refuses to sign one. I have said many times: we are ready and will start negotiations. Is War over? It is over. Armenia, do you want peace? It seems it wants it. Then why shouldn't a peace treaty be signed? Recognise our territorial integrity, let a peace treaty be signed, and the delimitation of borders be resolved. Look, our agenda on this issue is in unity with the agendas of the European Union, Turkey and Russia. They also say that delimitation work should be carried out. And we say so. But what does Armenia say? It says, let Azerbaijan leave our lands. But we are on our own land. We have created a new reality, not only in the Karabakh zone. Forming the new agenda, the issue of status was left aside, and the word Nagorno-Karabakh was not used. This had to be achieved. These are not questions that resolve on their own. How? Thanks to courage, decisiveness, the right steps, an offensive policy. Earlier I talked about offensive diplomacy, it is in place. But now it's completely offensive policy. So Armenia must reckon with this, accept new realities - whether it wants it or not. It must never forget that the iron fist is in place,' says the President.