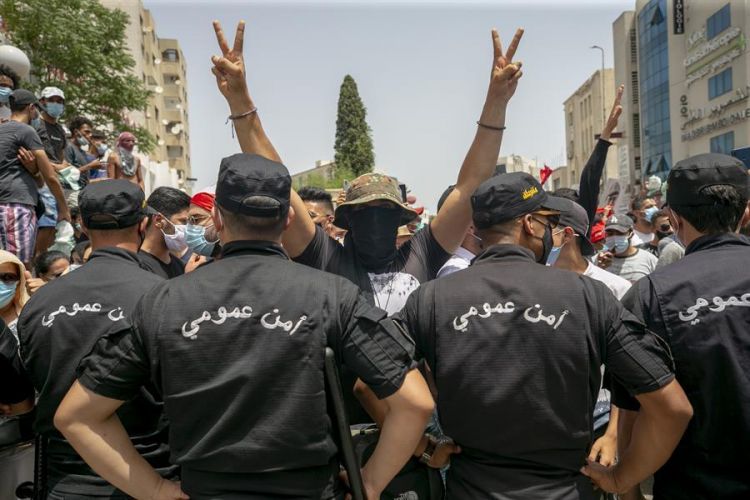 Tunisian President Kais Saied announced late on July 25 that he has fully assumed executive authority in addition to suspending parliament.
During a meeting with military leaders, Saied said he had decided to sack Prime Minister Hicham Mechichi, according to the Tunisian Presidency's official Facebook page.
He added that he has also decided to lift the immunity of all members of parliament, known as the Assembly of the Representatives of the People, and to undertake public prosecution himself.
He went on to note that he took these decisions in "consultation" with Mechichi and Parliament Speaker Rached Ghannouchi and will take other decisions until social peace returns to the country.
Ghannouchi, for his part, said Saied's move is nothing but a "full-fledged coup" against the Tunisian constitution, revolution and freedoms in the country.
He also called on the Tunisian people to "restore democracy" through peaceful means as this move drags the country into "one-man rule."
Speaking to Anadolu Agency, Ghannouchi later said he regretted the president’s move and noted that the democratically elected parliament and government were still carrying out their duties.
According to the senior politician, the president’s “wrongful” action had the potential to drag the country into an abyss, and he called on parliament members to stand and defend their legitimacy against the “constitutional coup.”
Arguing that the president’s way of understanding the constitution was completely wrong, he further noted that he would invite political structures in parliament to a meeting and continue their activities as usual on Monday.
Meanwhile, soldiers deployed at parliament did not allow Ghannouchi and accompanying lawmakers to enter the building.
Ennahda Movement party deputy leader Ali Larayedh also said in remarks to the Al-Jazeera news channel that the Tunisian president had carried out a coup against the constitution and the 2011 revolution.
Larayedh was questioning the fate of the prime minister, saying he was informed that Mechichi had been "detained" in the presidential palace.
The Tunisian presidency has yet to comment on Larayedh's claim. Former Tunisian President Moncef Marzouki also denounced Saied's move as a "full-fledged coup and violation of the constitution and law."
"The issue is not defending Ennahda but defending democracy in the country," Marzouki said, adding Saied granted himself all powers, which is "contrary to any logic."
He noted that this move would not lead to a "solution but a comprehensive demise."
Tunisia has seen popular protests against both the government and the opposition.