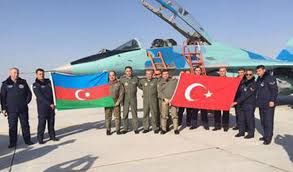 "One nation-two states is our idea. It will always remain so. In this regard, we held many rounds of negotiations and reached many agreements," Sentop added.

The announcement was made following the first ever trilateral meeting of Turkish, Azerbaijani and Pakistani parliament speakers.
Turkey voiced its strong support to Azerbaijan during the latest escalation of the conflict in Nagorno-Karabakh last year. However, Baku insisted that it had no combat assistance from Ankara or any other foreign country as it was ready to protect its interests on its own.
Azerbaijan also officially refuted reports that Turkey was going to build three air bases on its territory.