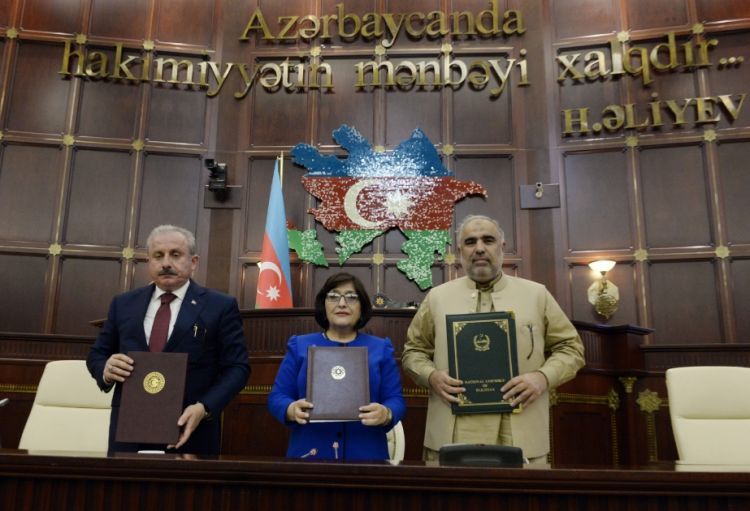 The trilateral relationship between Azerbaijan, Turkey and Pakistan has expanded to new horizons with the signing of the tripartite Baku Declaration in Azerbaijan’s capital Baku this week.
The strategic document was inked as a result of the meeting and discussions of the leaders of parliaments of the three countries on Tuesday. The declaration sets the grounds for an all-new format of tripartite political cooperation.
Sahiba Gafarova, the speaker of the Azerbaijani parliament, said the Baku Declaration would serve to strengthen the inter-parliamentary dialogue, as well as the relations among Azerbaijan, Turkey and Pakistan. According to Gafarova, the new format allows cooperation on regional and global issues of common interest, to demonstrate a common position at international parliamentary organizations and seek parliamentary support aimed at strengthening global peace and security.
The parliamentary speakers agreed to hold the second trilateral meeting in Pakistan’s capital Islamabad in 2022.
The Azerbaijan-Turkey-Pakistan cooperation axis has long been seen as one of the potentially influential unions in the region.
Relations of Azerbaijan with both Turkey and Pakistan have been at the highest level of strategic partnership since these two nations recognized Azerbaijan’s independence regained from the dissolved Soviet Union in 1991. Turkey and Pakistan were the first and third countries respectively to recognize the independence of Azerbaijan.
The three countries have been backing each other on multiple issues in the international arena, including matters related to the conflicts in Karabakh, North Cyprus and Kashmir. Both Turkey and Pakistan halted diplomatic relations with Armenia after it had occupied the Karabakh (Garabagh) region of Azerbaijan in the early 1990s.
The war between Armenia and Azerbaijan in the latter's Karabakh region last year put the spotlight on Azerbaijan's relations with Turkey and Pakistan. Ankara and Islamabad were voicing strong support for Baku, which liberated its territories from nearly 30-year-long illegal Armenian occupation.
Azerbaijan-Turkey Ties Evolve
Azerbaijan-Turkey relations have always been strong with the two often being described as "one nation, two states" by the former president of Azerbaijan Heydar Aliyev due to both being Turkic countries.
The mutual relations of Baku and Ankara reached the highest level following the bloody war between Armenia and Azerbaijan in the latter's Karabakh region, which took place from September 27 through November 9 of last year. The Turkish officials put political and moral weight behind Azerbaijan in the war that was the largest clash the region has not seen since 1994 when the first Armenia-Azerbaijan war ended with a ceasefire.
The cutting-edge weapons, such as Bayraktar TB2 unmanned attack drones purchased from Turkey, gave Azerbaijan an upper hand against Armenia throughout the war. Turkish President Recep Tayyip Erdogan attended the Victory Parade of the Azerbaijani army in Baku on December 10, 2020. Baku and Ankara have further strengthened the ties with Shusha Declaration – a strategic document that was signed during Turkish President Erdogan’s visit to Azerbaijan’s liberated Shusha city on June 15, 2021.
The Azerbaijani government, in turn, shares nearly all the same views of Turkey related to regional and international matters. Azerbaijan’s state oil company SOCAR is the largest foreign direct investor in the Turkish market with investments of more than $16.5 billion. The country tops the list of buyers of Turkish military products. Azerbaijan helps Turkey strengthen its energy security with billions of cubic meters of natural gas supplied from the Caspian Sea on the Southern Gas Corridor, namely the Trans Anatolian Pipeline.
Azerbaijan-Pakistan Relations Enter New Phase
Pakistan also enjoys close ties with Azerbaijan.
Since the very first days of the war in the Karabakh region, Pakistani Foreign Ministry and National Army voiced full support for Azerbaijan’s position on the conflict. Pakistan’s Prime Minister Imran Khan reaffirmed that the Karabakh region is an internationally recognized integral part of Azerbaijan. Pakistan has not recognized Armenia as a state due to its decades-long occupation of Azerbaijani lands.
Following the war, high-ranking Pakistani officials visited Azerbaijan to explore new avenues of cooperation, in particular, the military partnership.
“Lending a voice of support in a regional conflict in normal times is one thing. But when a country is actually at war then who stands with it attains much greater importance - even if it's just diplomatic backing,” said Khalid Rahman, the head of Institute of Policy Studies, an Islamabad-based think tank.
Whether it is an economic matter, a humanitarian issue, or a political course, Azerbaijan has also stood with Pakistan. Baku supports the policy of Islamabad regarding the conflict in Kashmir.
Since 2005, Azerbaijan has been actively engaged in humanitarian projects in Pakistan, which have been conducted under the auspices of the Heydar Aliyev Foundation. These projects include the establishment of a girls’ school in Muzaffarabad in 2005, and over the past years, the foundation has implemented healthcare, ecology and socio-economic projects, as well. In 2012, around 40,000 people in Pakistan were vaccinated against Hepatitis B, thanks to donations of the foundation. In 2014, the Heydar Aliyev Water Supply Scheme project was implemented in the Dera Ismail Khan district of Pakistan, which provided thousands of people with clean drinking water.