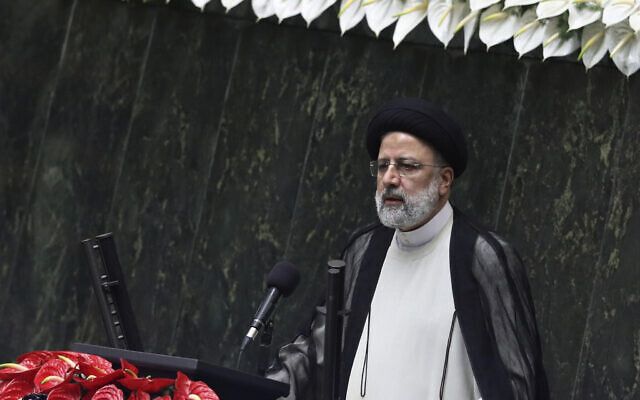 Iran is ready to resume talks reviving the nuclear deal with world powers under new president Ebrahim Raisi, and meetings could take place in Vienna from early September, a European Union official said on Saturday.
The senior official, speaking on condition of anonymity, said the EU’s negotiator on the file, Enrique Mora, attended Raisi’s swearing-in in Tehran last Thursday and spoke with the Iranian official designated to take charge of the nuclear talks, Hossein Amir-Abdollahian. He is the former deputy foreign minister for Arab and African Affairs in Iran’s Ministry of Foreign Affairs.
Amir-Abdollahian “is supposed to be the new foreign minister” in Raisi’s cabinet, but that has not yet been announced, the EU official said.
He added that it was unclear whether the nuclear talks would remain under the responsibility of the Iranian foreign ministry or be taken over by another body, such as Iran’s National Security Council.
Raisi is a hardliner expected to consolidate the ultraconservatives’ power during his four-year term.
He succeeds the relatively moderate Hassan Rouhani, whose landmark achievement during his own two-term presidency was the 2015 nuclear agreement between Iran and six world powers: the five permanent members of the United Nations Security Council plus Germany.
Former United States president Donald Trump pulled out of the deal in 2018 and re-imposed sanctions that have choked Iran’s oil-dependent economy. Iran responded by walking back measures it had agreed to abide by.
Talks have been happening since April in Vienna to find a way to bring both sides back into full compliance.
The last round took place on June 20, with no date set for when they would continue. The EU chairs the meetings.
The US has said it is “an urgent priority” to get Iran back to the table.
But tensions have risen, notably with an attack by drones last week on an Israeli-linked tanker off Oman that killed a Briton and a Romanian national on board.

The G7 — the US, Britain, Canada, France, Germany, Italy and Japan — blamed the attack on Iran. Tehran denies the accusation.