Police officer says no permission was given for Muharram procession in Srinagar, around 100 people detained 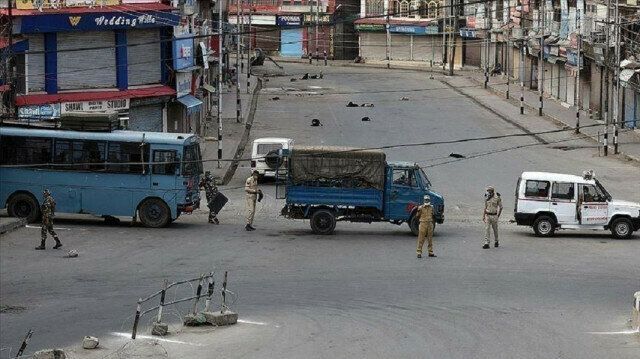 Police in Indian-administered Kashmir detained dozens of people who were part of a Muslim ritual procession in the capital Srinagar and beat up journalists covering the event, witnesses said Tuesday.
Rallies are held all over the world by Shia Muslims in Muharram, the first month of the Islamic lunar calendar, to mark the martyrdom of Prophet Muhammad’s grandson and his family in Karbala, now part of Iraq.
In Srinagar, the main procession – covering several miles from the central business area of Lal Chowk to the city’s old parts – has been banned since 1990, when the anti-India insurgency started in the disputed Himalayan region.
Several smaller processions, however, are still seen in some areas of the capital and rural districts.
Marchers resisted police orders to stop a rally in Srinagar on Tuesday, leading to the use of force by Indian security personnel.
“This was purely a religious procession, but they still stopped us. Many people were detained. I managed to escape,” Arshad Hussain Dar, a youth from Srinagar, told Anadolu Agency.
Witnesses said some rally participants were also carrying “Free Kashmir” banners.
Around 100 people have been detained, according to Aftab, a police officer who declined to give his full name.
Several journalists said police physically assaulted them and told them not to cover the event.
“I asked a police officer not to abuse us or use force, but they smashed my camera with batons. I have injuries on my legs and back. They hurled expletives at us,” Sajad Hameed, a photojournalist for Free Press Journal and the Kashmir Times, told Anadolu Agency.
Two other journalists, Waseem Andrabi and Burhan Bhat, were also beaten up by police, according to witnesses.
Aftab denied the accusations.
“It was not deliberate. We were only trying to stop the mourners who did not have permission for the procession,” he said.