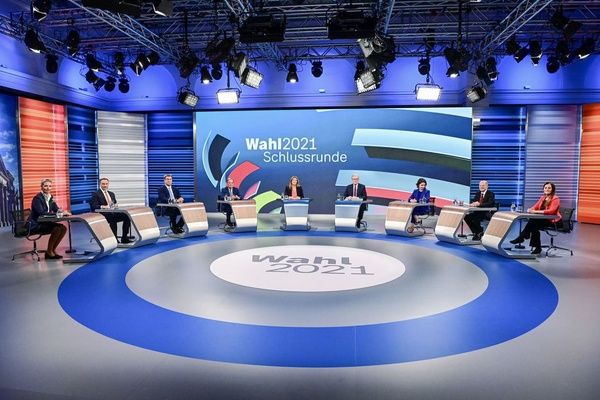 A FGW poll for ZDF Television showed support for the conservative CDU/CSU alliance, whose chancellor candidate is Armin Laschet, up one percentage point at 23%.
The Social Democrats are clinging to their lead, but only just. The FGW poll put the centre-left party, whose candidate is Finance Minister Olaf Scholz, unchanged on 25%.
The Greens, likely to play a role in government, inched up half a percentage point to 16.5% and the pro-business Free Democrats (FDP) were stable on 11%.
Merkel, in power since 2005, plans to stand down as leader of Europe's biggest economy after Sunday's election, although she will remain chancellor during coalition talks.
In the 90-minute debate, in which few sparks flew between top representatives of the main seven parties, Laschet promised not to raise taxes and to keep to strict budget rules which have been relaxed to help a recovery from the coronavirus crisis.
"I don't want tax rises, I want to keep the budget rules," said Laschet, broadly agreeing with the FDP's Christian Lindner.
"We have a high deficit, we are very heavily indebted in Europe, we have high inflation rates," said Lindner, adding he would prefer to cut subsidies, for example for electric cars.
Scholz stressed the need for investment while the Greens' candidate, Annalena Baerbock, said fiscal rules could be softened to spend sufficiently, especially on the environment.
Fundamental differences, also in foreign policy areas such as China, which came to the fore during the debate highlight the looming difficulties in forming a coalition. read more
The candidates stayed tight-lipped on their preferred partners and refused to rule much out.
Lindner said there was greatest policy overlap between his party and the conservatives. Experts say that a possible tie-up of the conservatives, FDP and Greens, which may work in terms of arithmetic, would need major compromises especially from the smaller parties.
Scholz, reiterated that he would not agree to some of the far-left Linke Party's more radical policies, such as pulling out of NATO, if he were to form a left-wing alliance.
"There are concrete conditions," said Scholz. "We need cooperation within NATO. We need a good relationship to the United States."